Michael Douglas seems hopeful that he’ll get back together with Catherine Zeta-Jones soon. 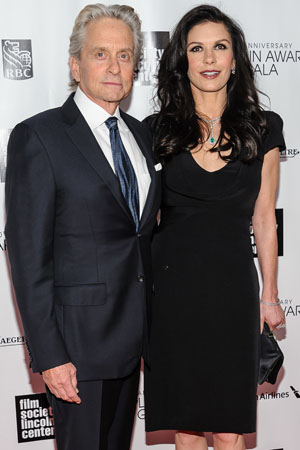 Michael Douglas couldn’t help but break out the double entendres during his Best Lead Actor acceptance speech at the 2013 Emmy Awards. However, the Behind the Candelabra star also added a few poignant words for his estranged wife, Catherine Zeta-Jones.

“I want to thank my wife, Catherine, for her support,” he said.

Some assumed that meant the pair — who split in August — are getting back together. Douglas confirmed the news, telling People that they’re “working things out” and “talking” with an aim to get back together.

VIDEO: When will we see Michael Douglas in sequins again? >>

However, their split never seemed really serious to begin with. In August, he told a German reporter that the split is only a “temporary separation” and she is very much still his wife.

“I’m married,” he said incredulously when the reporter asked why he was wearing a wedding band. “I have a crisis at home?” Douglas added to another reporter, “No, I think the press has a crisis. We are fine. My wife and I are, are fine.”

Douglas also gave a shout-out to his troubled son, Cameron Douglas. “I’m hoping I’ll be able to — [they’ll] allow me to see him soon,” he told the audience.

His son from Douglas’ first marriage to Diandra Luker, is currently in federal prison for dealing drugs. Douglas later told reporters that he hasn’t been allowed to see Cameron in over a year — and it’s not likely to change any time soon.

“…Part of their punishments if you happen to have a slip — this is for a prisoner who is nonviolent — as about a half a million of our drug-addicted prisoners are, they punish you,” he explained. “So for my son’s case, he’s spent almost 2 years in solitary confinement and right now I’m being told that I cannot see him for two years.”

“It’s over a year now and I’m questioning the system. Obviously, at first, I was certainly disappointed with my son, but I’ve reached a point now where I’m very, very disappointed with the system and, as you can see from what [U.S.] Attorney General Eric Holder has been doing — and other issues regarding our prison system — I think things are going to be revived regarding nonviolent drug addicts/criminals,” he added.