Scandal‘s Kerry Washington may have lost the bid for Lead Actress in a Drama Series at the 2013 Emmy Awards, but Dan Bucatinsky brought home the trophy for Guest Actor in A Drama Series. 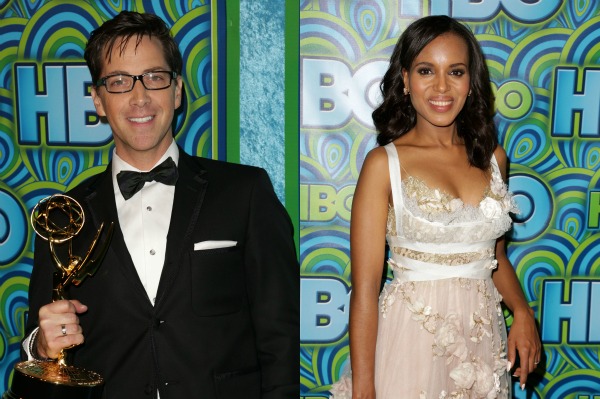 Scandal had an interesting night at the 2013 Emmy Awards. With powerhouse Kerry Washington nominated for Lead Actress in a Drama Series, it seemed like she would have been a shoo-in to take home the statue. For the past two seasons, Washington has been regularly killing it as Olivia Pope on the hit ABC drama.

When the series started out, Olivia was undoubtedly an intriguing character. She ran a firm that specialized in solving publicity nightmares for the rich and ridiculously famous. Soon, though, it became clear that there was even more to Pope than originally thought, especially when big secrets came out — such as the fact that she had an affair with the president, and even had a hand in getting him elected in a way that was not quite legal.

Ultimately, Washington lost out to Claire Danes from Showtime’s Homeland. But luckily there was another actor ready to take up the baton in the race for Emmy gold: Dan Bucatinsky.

Bucatinsky has been having one heck of a year. The Hollywood Reporter reports that Bucatinsky recently signed a deal with Scandal showrunner Shonda Rhimes to develop his book Does This Baby Make Me Look Straight? Confessions of a Gay Dad as an hour-long dramedy for ABC.

“I feel like a lot of things have converged all at once. I had many, many years where it was bupkis,” Bucatinsky told The Hollywood Reporter.

That was in addition to the fact that TLC had just given the green light to a second season of Who Do You Think You Are?, on which Bucatinsky is an executive producer, along with longtime friend Lisa Kudrow, and his husband, screenwriter Don Roos.

“It’s a bit of a three-car pileup and I couldn’t be happier about it,” Bucatinsky said about all the good news. “Plus Lisa Kudrow is doing an arc on Scandal. It’s really a time when she and I are celebrating our company’s 10-year anniversary. It’s a good year, plus marriage equality? This has been a great year.”

Last week, also Bucatinsky won a Creative Arts Emmy, despite his own misgivings about his chances.

“I had already convinced myself in the hour that I was sitting there waiting for my category that it was going to go to [Homeland’s] Rupert Friend. Then [Mad Men creator] Matthew Weiner opened the envelope and he hesitated for one second, which I’ve learned means someone is trying to figure out how to say my last name,” Bucatinsky revealed. “My heart sunk and I turned to Don and then Matt said my name. I think I kissed Don on the chin and raced up there as fast as I could. I didn’t take the speech out of my pocket, and I just tried to get my s*** together. I tried to remember all the people I wanted to thank and wound up speaking much more from the heart than I would have had I read from my prepared speech. I meant what I said and I was so proud to be in that category and so grateful to Shonda Rhimes and Jeff Perry. I’m still in shock.”

To top it all off, Bucatinsky took home the Guest Actor in a Drama Series Emmy for his work on Scandal, where he plays husband to Jeff Perry’s Cyrus Beene. Talk about a great way to cap off what has been a fantastic year, and an especially good week.