Rihanna’s selfie with an endangered slow loris in Thailand led to the arrest of two men. 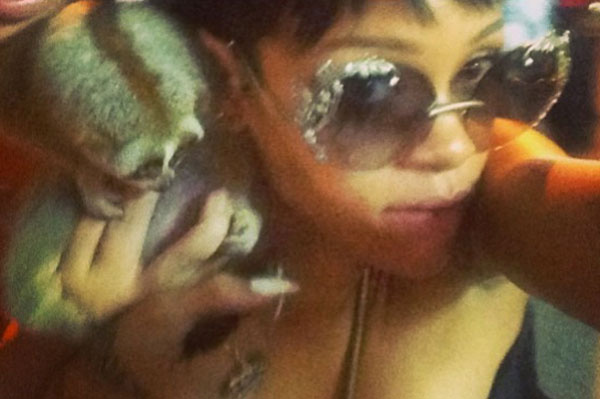 A photo Rihanna took of herself holding a slow loris, which is an endangered primate, resulted in the arrest of two men over the weekend.

After posting a series of her typically racy tweets while vacationing in Thailand, Rihanna also tweeted a link to a selfie on Instagram where she was holding a slow loris. The incriminating photo led authorities to the arrest of two people who were allegedly peddling protected animals.

The cute primate, which looks like a big-eyed squirrel, is an endangered species native to Southeast Asia, listed as a protected animal.

At the time, Rihanna did not realize that the animal she was holding in the photo was endangered, but after posting the picture someone alerted the authorities. As a result, two young men were arrested for violating a law that prohibits them from charging tourists money to take pictures with protected species.

Once Rihanna’s photo went viral, Thailand’s Ministry of Natural Resources launched an investigation which ended in a police raid resulting in the arrest of two young suspects. The men are facing up to four years in jail plus some very hefty fines.

“Phuket authorities were alerted to the [Rihanna] picture,” Phuket district chief, Weera Kerdsirimongkon, said by phone on Sunday, according to People magazine, “and last night police arrested the two individuals who brought out the loris as a photo opportunity for tourists.”

Because the slow loris population has been decreasing in number since the 1960s, conservation groups are concerned photos such as Rihanna’s will further endanger the cute animals.

Meanwhile, other eyebrow-raising tweets Rihanna posted from Thailand included one that detailed an X-rated show in Phuket’s red-light district. Such shows are said to be against the law in the country, so the controversial R&B singer got the attention of the authorities yet again — only this time it wasn’t for a good cause.