Chris Brown has a new complaint about his bad reputation: We’re all a bunch of racists. 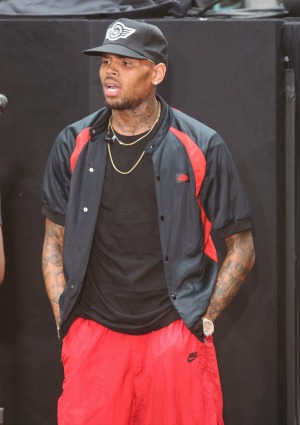 Chris Brown’s monumental ego has reared its ugly head again, this time with an incredibly insensitive comparison to a dead teenager.

In an interview with Jet magazine, Brown said his critics are racists (just like the judge who ordered him to do an additional 1000 hours of community service recently) and implied his troubles — including vilification for beating up then-girlfriend Rihanna in 2009 — are just as bad as what dead teenager Trayvon Martin suffered.

“I identify with Trayvon 100 percent as far as living in 2013 and still dealing with blatant racism,” he told the mag. “This generation is so used to racism that it’s normal; we don’t care. We aren’t on drugs or catching AIDS, but they still look at us as n*****.”

He also threw industry powerhouse Jay Z under the bus, complaining that no one gives Mr. Beyoncé a hard time about his violent criminal past.

“This is something I’ve been dealing with for the past maybe five years. Anybody with a voice — Tupac, Michael Jackson, the Notorious B.I.G. — gets formatted… Except maybe for Jay Z, who is accepted by White America because he shakes hands and kisses babies,” Brown said. “No disrespect, because I’m a fan, but nobody brings up the fact that he stabbed somebody and sold drugs. He gets a pass.”

But none of that is the cause of his bad reputation, of course — he blames the media instead.

“The media is full of yellow journalism,” he said. “A lot of things I say, they will flip it. Instead of them getting off on all the positive stuff that I do, they will bring out the negative and draw out that story.”

Brown also broke down his relationships with both Rihanna and Karrueche Tran, specifically that time of overlap.

“Relationships are the most difficult part. That’s why I was honest with those two girls and put out that video,” he said. “My ex and I broke up because of the ‘situation’ and she had moved on. I fell in love with another girl. Then my ex came back, so it was like, ‘What is a man to do?’ I told them both the truth. I didn’t do the sucker role.”

Read the full interview with Chris Brown in the new issue of Jet, on newsstands Sept. 23.