Katrina Bowden isn’t ready for motherhood. The budding actress recently wed and is keeping the stork at bay. 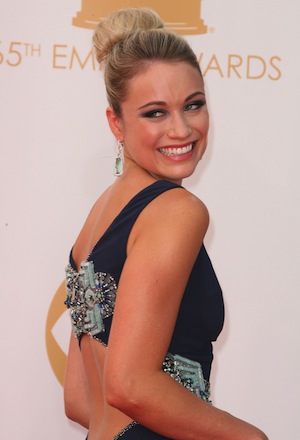 Former 30 Rock star Katrina Bowden is basking in the glow of her new marriage. Earlier this year, she wed musician Ben Jorgensen, who she was engaged to for a year and a half. They’re still newlyweds, but that doesn’t keep family and friends from pressuring them to have kids. It seems as if everyone has baby on the brain.

Bowden told People, “Everybody keeps asking when we’re going to have kids. We just got married. I’m like, no, we’re not going to have kids for a while.” The couple wants to focus on each other and revel in their wedded bliss before bringing children into the mix.

Shakira has baby: Kicks off most anticipated births of 2013 >>

“Being a newlywed is amazing,” she said. “It doesn’t really feel a whole lot different than being a non-newlywed.” Even though they were hitched months ago, the actress revealed they just got back from their honeymoon last week. They spent two weeks soaking up the sun in Hawaii, which she called “amazing!”

How to get VIP treatment on your honeymoon >>

On the career front Bowden is keeping busy. Since 30 Rock wrapped, she’s shot appearances in several films. She’s also gearing up for a new indie dramedy which is scheduled to begin filming in a couple weeks. It looks like Bowden is successful on all fronts.

Even though she’s holding off on children (for now), we’re sure she’ll make a great mom in the future. Women really can have it all.