Love is in the air. Zoë Kravitz recently met up with ex-boyfriend Penn Badgley for a PDA-filled weekend. 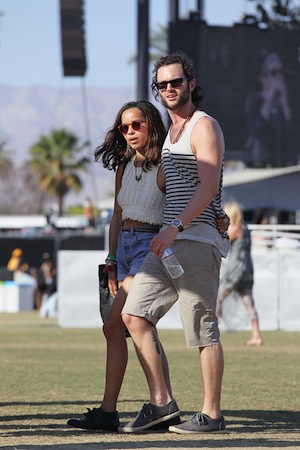 Lightning may have struck twice for Zoë Kravitz and Penn Badgley. The former flames recently reunited, setting blogs ablaze. Is a reconciliation upon us? According to Us Weekly, the actors were spotted together over the weekend in a romantic Roman setting.

4 Romantic destinations for a lovers’ getaway >>

The couple originally split back in June after nearly two years together. But thankfully, they ended things on good terms. A source close to the couple claims their busy careers were the cause of their breakup. Now it looks like they may be on the rebound.

“They broke up because of schedules but they had a moment to reconnect and those feelings are still there,” said the source. “We’ll see.”

On Sunday, Sept. 22, Kravitz and Badgley were spotted strolling through the streets of Rome, Italy. At one point, they even shared a kiss. With all that PDA, it’s no wonder rumors are flying. Since their previous breakup was amicable, a reunion wouldn’t be far-fetched. If there were no hard feelings, they could easily give it another shot.

Even though they’re adorable together, they need to be careful. Old problems could rear their ugly heads. If work was an issue before, it’s sure to be one again. Kravitz has become a hot commodity in Hollywood. Her star in on the rise thanks to roles in After Earth and the upcoming Divergent. And following Gossip Girl, we’re sure Badgley wants to move beyond teen-idol status.

We wish them luck.

Do you think Zoë and Penn should give it another shot?