Jeff Daniels has an Emmy and he’s not sorry about it. The actor trumped TV’s biggest stars to become the night’s most shocking winner. 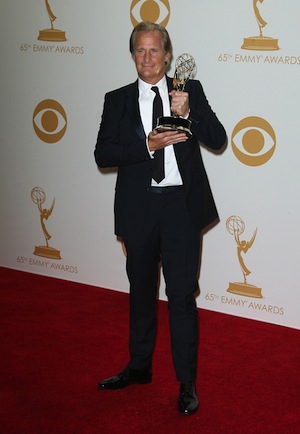 Sunday night’s Emmys were filled with surprises. One of the biggest shocks came in the form of Jeff Daniels, who took the award for Lead Actor in a Drama Series. He had tough competition from favorites like Bryan Cranston (Breaking Bad) and Damien Lewis (Homeland). But his performance as Will McAvoy in The Newsroom reigned supreme.

The Newsroom cast members tell us their favorite lines and moments >>

According to E! Online, Daniels knew he was a dark horse. During his acceptance speech he poked fun at the few accolades he’s received during the course of his career.

“The last thing I won was a few years ago for Squid and the Whale,” he said. “I won the Best Actor Over 50 from the AARP. With all due respect to the AARP, this is better.”

Daniels also beat out Hugh Bonneville from Downton Abbey, Kevin Spacey from House of Cards and Jon Hamm from Mad Men. For those of you who have an issue with Daniels’ win he wants you to check your facts.

“I’ve been nominated a bunch of times, Google it,” he said. “I’ve been kind of trying not to lean towards it and not to hope too much. There were six of us nominated, there easily could have been 10 of us.”

The Newsroom is the brainchild of Oscar-winning writer Aaron Sorkin. With Daniels leading the cast it seems like a win-win for everyone involved. Unfortunately, it hasn’t been an easy road for the drama. Critics have a love-hate relationship with the series, which recently wrapped its second season. Maybe Daniels’ win marks a turning point for the show?

How do you feel about Jeff Daniels’ big win?