Michael Douglas was a big winner at Sunday night’s Primetime Emmys, but the actor used his moment to address his troubled son and flaws in the penal system. 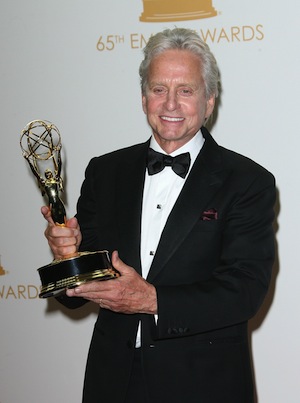 On Sunday, Michael Douglas took home a Primetime Emmy for his performance as Liberace in Behind the Candelabra. The actor’s acceptance speech was filled with jewels, including a few racy jokes targeting co-star Matt Damon.

But the most interesting tidbits were a shout-out to estranged wife Catherine Zeta-Jones and a vague mention of his son Cameron, who’s currently in prison and serving time for drug violations. During his speech, Douglas revealed that he hopes he’ll be allowed to see his son soon.

According to EW, the actor expanded on the issue in the press room.

“My son is in federal prison. He’s been a drug addict for a large part of his life. Part of the punishments — if you happen to have a slip, and this is for a prisoner who is nonviolent, as about a half-million of our drug-addicted prisoners are — he’s spent almost two years in solitary confinement. Right now, I’ve been told that I can’t see him for two years. It’s been over a year now. And I’m questioning the system.”

Michael Douglas’ son speaks out from behind bars >>

Douglas declares he’s not excusing his son’s behavior. He’s just shocked at how he’s being treated.

“Obviously at first, I was certainly disappointed in my son. But I’ve reached a point now where I’m very disappointed with the system. And as you can see from what Attorney General Eric Holder has been doing regarding our prison system, I think things are going to be revived, regarding nonviolent drug addicts. My last comment on that is the United States represents 5 percent of the world’s population and we have 25 percent of the world’s prisoners.”

Cameron Douglas is scheduled for release in 2018.