Michael Douglas delivered an outstanding performance as Liberace in HBO’s Behind the Candelabra, which won him an Emmy. Could we be seeing him in sequins again? 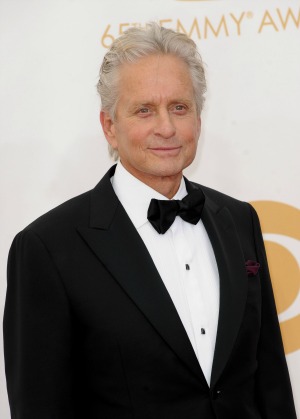 Douglas was spotted looking very relaxed on the red carpet of the Emmys on Sunday night when SheKnows caught up with the star and asked him, “When are we going to see you in sequins again?” The question referred to his role as Liberace in the HBO film Behind the Candelabra.

He was then asked, “What is the best advice you have ever received?” It is a question we have all wondered about given that Douglas is such a phenomenal and successful actor.

His response? Douglas claims the best advice is to “trust your instincts, the first take is usually the best.”

After being congratulated and wished good luck, the luck paid off. Michael Douglas won his first Emmy!

On Sunday night, the actor raised the mood of the Emmys and had the audience laughing at his acceptance speech after he’d won the Emmy Award for Outstanding Lead Actor in a TV Miniseries or Movie for his portrayal of flamboyant pianist Liberace in the HBO film Behind the Candelabra.

The event marked Douglas’ first Emmy win (after five nominations) and the actor decided to make a speech that would not be forgotten.

He started off by thanking fellow nominee and co-star of Behind the Candelabra Matt Damon, who starred as his gay lover in the HBO film.

Douglas got the crowd laughing and Damon blushing when he said, “Obviously there’s one nominee in particular that I really have to thank. This was a two-hander, and Matt, you’re only as good as your other hand.”

“So, I can’t tell you… you were magnificent and the only reason I’m standing here is because of you. So you really deserve half of this. Do you want the bottom or the top?”

Backstage, Douglas explained his “two-hander” comment, saying its a term used in acting that’s “all about two people together, and you’re only as good as the other partner. We relied on each other through this who experience, and I wouldn’t be up onstage without Matt and his performance and his commitment.”

Douglas continued his speech by thanking HBO, the show’s producers, the cast and even gave a special mention to Steven Soderbergh before getting a little more emotional with the mention of his family.

Douglas continued, “I want to thank my wife, Catherine, for her support, my kids Dylan and Carys and a shout out to my older son Cameron, and hoping that I’ll be able and they’ll allow me to see him soon.”

The speech was truly heartfelt as the actor acknowledged his son Cameron Douglas, who is in prison serving a sentence for narcotics distribution and additional drug infractions behind bars.

While the Behind the Candelabra actor’s personal life may not be perfect at the moment, at least he can add an award to his list of accolades.