The ending is definitely bold… and weird, but the best episode of Dexter we’ve seen in a long time. The show goes out in a way no other show has in the past. It’s as strange and tragic as it is lovely. 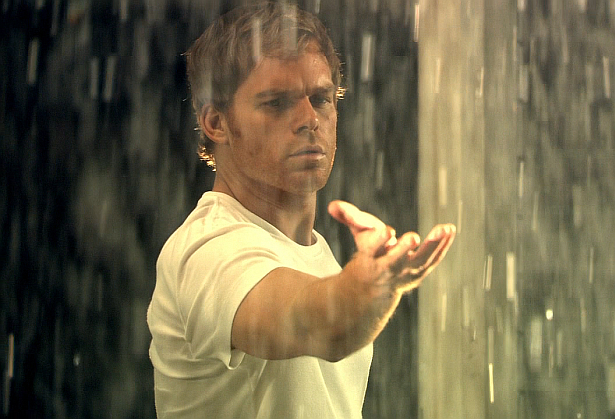 The epic story of Dexter has ended. Though the finale was completely shocking and unexpected, it will live in our minds for weeks to come. I guess that was the point, right? So it isn’t yet time to say goodbye. We will need a good amount of reflection before we put this series finale behind us. The show definitely won’t be forgotten. We’ll, no doubt, continue to remember and talk about it for years to come. The finale helped solidify that with one of the best episodes of Dexter in years.

WARNING: Do not continue reading unless you want to know how Dexter ends.

To be honest, the finale starts a little slow. We don’t really want to delve into it too much. In essence, Deb (Jennifer Carpenter) is carted off to the hospital. Saxon forces someone to stitch up his arm. And Elway blocks Dexter (Michael C. Hall) and Hannah’s plans to board their flight.

Then it gets really good. Or really bad, depending on how you look at it.

Dexter stays to deal with Saxon and finally kills him. In the middle of the jail where Saxon is being held following his arrest. Dexter tries to make it look like self-defense but doesn’t do a very good job.

Still, Batista and Quinn both watch the video and agree it must have been self-defense. This is a great moment because, in essence, they both accept Dexter for who he truly is without even realizing it.

There are complications with Deb’s surgery. She has a stroke. The doctor says it will take a miracle for her to recover. Even if she does, she won’t be able to feed herself and won’t recognize anyone.

Dexter takes things into his own hands. He turns off Deb’s life support. After staying with her as the heart rate monitor flatlines, he takes her out on his boat as the hurricane closes in, wraps her in a white cloth and places her in the water.

What did get me were the flashbacks in this episode. We saw Deb and Dexter right after Harrison was born. Her excitement and faith in Dexter was so amazing and gut-wrenching. It brought us back to the Deb who revered her brother and thought he could do no wrong. It was the hopeful and optimistic Deb we loved so much.

Dexter is the monster

After putting Deb in the water, Dexter drives his boat toward the hurricane. He narrates that Saxon made him realize the danger he puts his loved ones in. He can’t do that to Hannah and Harrison. This lament we’ve heard before. It’s a little old. At least Dexter is doing something about it now instead of just brooding? Uh… this is the moment where I start thinking Wait! He’s supposed to realize he’s not a monster in the finale, right?

They find shreds of Dexter’s boat after the hurricane clears. Hannah sees the report of Dexter’s demise on the news while in Argentina and hides her tears from Harrison.

Cut to the middle of a forest where lumberjack workers are cutting down trees. Dexter is among the workers. He faked his death!

Dexter walks into his barren home, sits down and looks vacantly at camera.

Then the credits roll.

At first, I was too surprised to think about whether or not I actually liked the ending. Let’s be real, it’s definitely the weirdest finale we’ve ever encountered. The more I thought about it, though, the more I liked it. Dexter has chosen exile to ensure the happiness of the people he loves. There is nothing more honorable. So he decides he’s a monster and then makes the most selfless decision possible. It’s the most opposite monster move we’ve ever heard of. Now that’s a finale that will make you think.

What was your take on the series finale of Dexter? Did you think the episode was a good way to end the show?