SheKnows visited the set of the new comedy Mom this past week and got the scoop, including Anna Faris’ mom guilt and Allison Janney on why she’s not a mom. 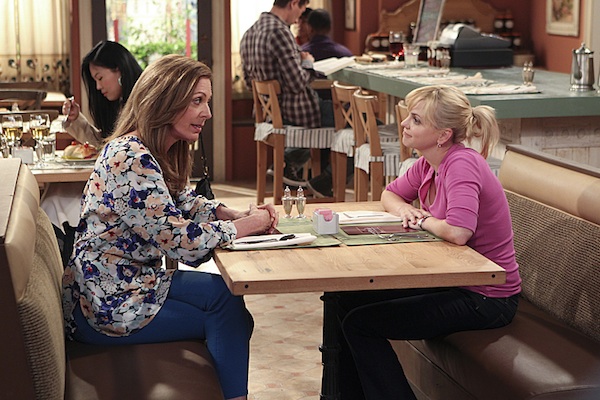 In case you haven’t heard, the new CBS comedy Mom is going to be freaking hilarious. If the cast of leading funny girls — including Anna Faris and Allison Janney along with co-creator Gemma Baker — isn’t enough to convince you, this Q&A should do the trick.

We were lucky enough to stop by the set before the premiere to check out some footage of the show. The scenes we saw were some pickup shots and inset scenes from Season 1, Episode 7. The episodes are filmed in front of a live studio audience.

Question: Have you done something as a mother that you said you’d never do?

Anna Faris: Bottle in the crib. I was never a baby person. As a kid growing up, I was never drawn to babies, so this has been a learning experience. I knew there was going to be a lot of guilt involved, but I didn’t know how much guilt. And I think there’s going to be a lifetime of guilt. But, I’m loving it.

Q: Allison, is this your first sitcom?

Allison Janney: It is. And it’s what I’ve been waiting for my whole career. It’s the perfect blend of all the things I love about acting and theater and being in front of an audience, and I love doing movies. I love that we get to rehearse in this. It’s a little bit every day. It’s fun just being on our feet and winging it, and the writers change it, and it’s on the fly.

And the schedule allows you to have a life outside. I think probably one of the reasons I’m not a mother is because of a show called The West Wing. That was 18-hour days and now this, especially with Anna who has a new baby to be able to raise him, so I’m thrilled. 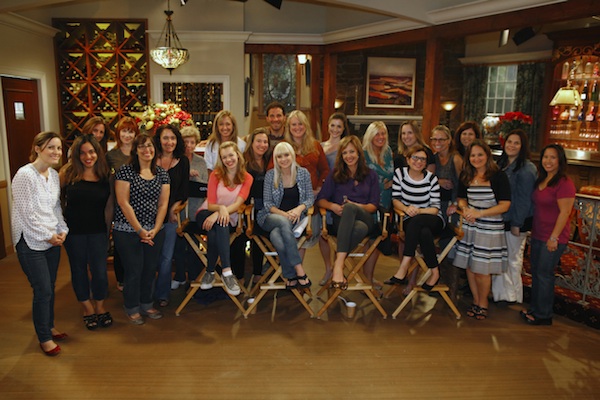 Q: What’s the best advice your mom has given you?

AJ: My mother is incredibly gracious and kind and considerate and polite and listens to other people. Those qualities she gave me are instilled in me, and I think they have served me well in my career. I like to be an actor’s actor — life is too short, and it’s wonderful to work with people who are generous and kind and gracious and those are qualities I admire in people, and that’s what she taught me.

Gemma Baker: My mom is an incredible woman. She’s a bishop and actually she’s…

GB: Yes, a girl with a bishop for a mom. So she has given me a lot of wonderful advice about my mother, which is, “In this world there are guests and there are hosts and your mother is a host.” I’ve always wanted to be like her in that way — generous and giving of herself.

AF: This is something really specific. I think about it a lot. She used to be really scared of insects, spiders, bugs, whatever. And she got some advice from an older relative, my great aunt or whatever, and she witnessed my mom being scared, and she said, “Don’t pass that fear on to your children.” And so she, after that, didn’t. So now my brother and I have a fondness for all bugs, which kind of freaks people out, but I love that idea that she didn’t pass her fear on to us, and I love that it’s sort of about being brave.

Q: Does Blake [referring to Blake Garrett Rosenthal who plays the 8-year-old son of Faris’ character] understand everything? Has anything funny happened yet in the filming?

AJ: (laughing) We don’t explain things to him.

AF: We get the script over the weekend and then we shoot live on Friday — I still can’t wrap my head around that idea. I was so scared about messing up, but this is a really forgiving format.

Q: How do you not laugh?

AJ: [Referring to the scene shot that morning] We did in the beginning when we first did it, and Blake couldn’t stop laughing and thought it was funny, and I love making him laugh.

AF: I think we’re the kind of actors who get emotionally invested in the scene and so it’s hard to look at it from an outsider’s perspective. I started in this industry doing the Scary Movies and everyone was constantly breaking and laughing, and it just made me crazy after a while, and I knew we’re going to be here for hours.

Q: I read the New York Times comparing the moms to the dad shows — are you concerned about the competition with those other shows?

GB: I really don’t. I feel like we’re telling this story, and there’s room for everybody. I don’t feel a competition with those other shows. My focus is just on this show and making the show good, and I love it so much.

Mom airs tonight on CBS. Will you be watching?