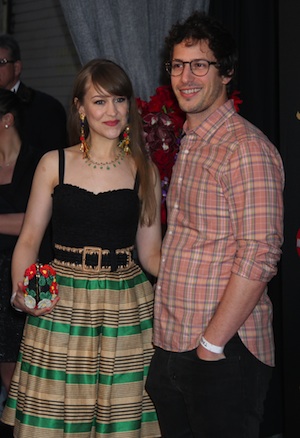 Samberg and Newsom began dating five years ago and became engaged shortly after Valentine’s Day this past February. Us Weekly confirmed the nuptials directly with Andy Samberg’s rep late yesterday.

While Andy Samberg is a household name thanks to his Saturday Night Live (SNL) fame and comedy trio The Lonely Island, Newson is well-known within independent music circles. Joanna’s last three albums did well in the U.K. with her latest release, Have One on Me (2010) peaking at number 28.

There’s no word yet on number of guests but E! News just confirmed that Adam Sandler, Maya Rudolph, Amy Poehler, and Nick Kroll were just a few of the A-list celebrities that watched the couple exchange vows.

Samberg and Newsom chose the Post Ranch Inn in Big Sur, California as their wedding backdrop. The breathtaking luxury resort is set on a dramatic cliff in the Santa Lucia Mountains overlooking the Pacific Ocean.

The venue’s website states it can only accommodate weddings up to 75 guests, so it sounds like Andy and Joanna opted for an intimate affair with just their closest friends and families present on their wedding day. Joanna wore a custom Zac Posen gown.

Andy joked with E! News earlier this week that he was a bit overwhelmed with the wedding planning and was looking forward to spending time with his Joanna after the wedding.

“So far, it’s been nothing but stress and joy,” said Andy. “The joy is the lady herself. The stress is the planning. We tried to go small and it was just impossible. There’s too many relatives, too many friends.”

Congratulations to Andy Samberg and Joanna Newsom on their beautiful wedding and happy nupitals!