Paula Patton could be crowned queen of the geeks. The actress may star in the biggest video game adaptation of all time — World of Warcraft. 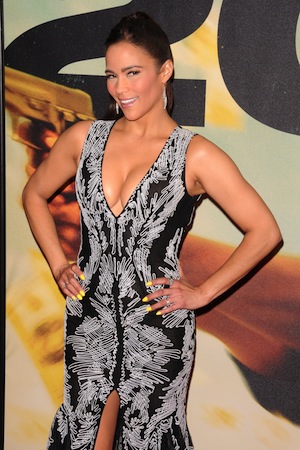 Paula Patton is up for her biggest role yet. The actress, who headlines this week’s Baggage Claim, is in talks to join World of Warcraft. Yes, we’re referring to the hugely successful online role-playing game. Legendary Pictures has been trying to adapt it for years, and it looks like it’s finally happening.

Paula Patton lays it on Thicke about her blessed life >>

According to Deadline, the studio is moving forward with the film, and it already has stars in mind. Patton is in negotiations to play the female lead, while Irish actor Colin Farrell could be her male counterpart. The film will be directed by Duncan Jones, who previously helmed Moon and Source Code.

World of Warcraft is a huge undertaking. The game has fantastical elements set against a medieval backdrop. Some of its avatars include gryphons, dragons, zombies, werewolves and elves. Could you imagine Patton or Farrell appearing as one of those creatures?

This would be a big step for Patton, whose career is on a roll. She recently appeared in last summer’s 2 Guns opposite Denzel Washington and Mark Wahlberg. She also co-starred with Tom Cruise in the megahit Mission: Impossible — Ghost Protocol.

Meanwhile, Farrell can be seen in this winter’s Saving Mr. Banks. This feel-good drama explores the untold story of how Walt Disney (Tom Hanks) got the blessing of author P.L. Travers (Emma Thompson) for his adaptation of Mary Poppins.

Do you think Patton and Farrell can pull off World of Warcraft?