Eiza Gonzalez has made a big splash in the U.S. even though she only arrived from Mexico a few weeks ago. She has the tabloid press in a frenzy. 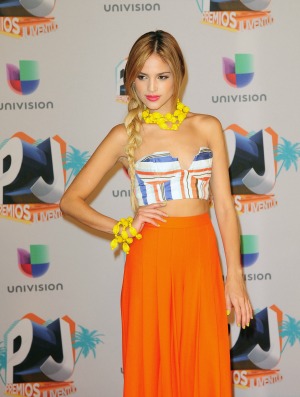 A week ago, very few people in the U.S. knew the name Eiza Gonzalez. But now, since being spotted kissing Liam Hemsworth earlier this week, she’s being hounded by the paparazzi.

The tabloid press has been all over the Mexican singer and actress, especially since she’s been criticized in the past for her evolving looks. According to Radar Online, the 23-year-old is known as the “Michael Jackson of Mexico” on social media due to her reported affinity for plastic surgery.

The gossip site claims there have been vicious tweets about the young actress’ looks over the last year. A search of the social media site didn’t turn up the reported tweets, but Gonzalez has addressed the issue in the past.

Last year, she wrote, “The truth is, it’s such a shame that they make up such things, they have a lot of imagination. Tomorrow they’re going to say that I got liposuction!”

She has admitted to her fans that she did get a nose job in 2011.

“The one thing that I had operated on, and I say it and I’m not going to hide it, is my nose,” the actress explained. “And you can go ask López Infante [her plastic surgeon] if he’s done anything else to me! I’m not going to talk about this again! Whoever wants to believe that I’ve changed my face, whatever! I’m content and happy, kisses!”

The surgery was done for purely cosmetic purposes — there was no medical reason behind the rhinoplasty.

However, the starlet seems to understand the tabloid press pretty well.

“Because I’m focused on work and I don’t give them anything to make fun of me about, they invent things,” Gonzalez said. “I’m super focused on my CD and more!”

All of this attention can’t be too bad for her career. In addition to having The Hunger Games hunk on her arm, she was cast in an upcoming comedy this week. She will be shooting a role in All Hail the Squash Blossom Queen, which also stars Bonnie Wright from the Harry Potter franchise and Cameron Monaghan from Shameless.