The Robertson clan and Tim Allen join forces tonight when Si and Willie Robertson make their acting debut on Last Man Standing. What could go wrong? 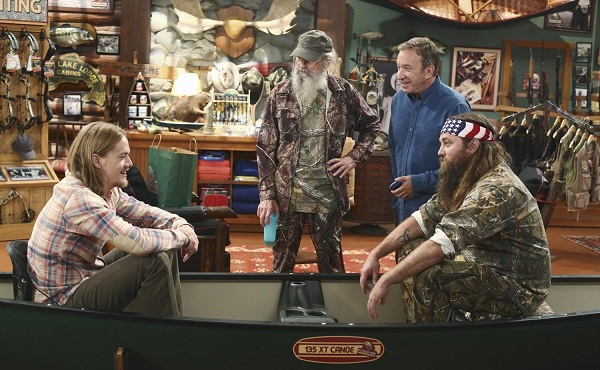 That’s right, Jack! Uncle Si and Willie Robertson (from the hit reality show Duck Dynasty) are all set to make their acting debut tonight on the Season 3 premiere of Last Man Standing with Tim Allen.

In the premiere, Mike Baxter (Allen) is up against a newly philosophizing co-worker/adoptive member of the family. Mike’s middle daughter Mandy’s boyfriend, Kyle, has recently discovered a new love for philosophy. There is just one problem: Mike is convinced it’s distracting Kyle from his work as the lackey at The Outdoor Man Store. That seems pretty laughable, as we’re not entirely certain what Kyle does there all day — but still.

Remember when they paired up Last Man Standing and Malibu Country? >>

Then, the store’s two biggest customers arrive and are ready to gear up for deer season. Will Ray (Uncle Si) and Brody (Willie) be able to come up with a solution to Mike’s concerns and Kyle’s newfound internalizing? The camo-clad Ray and Brody certainly think so!

Meanwhile, Mike continues his uncanny ability to weasel his way into all decisions made for his 6-year-old grandson, Boyd. When the America-loving über-Republican finds out his daughter and her son’s father have enrolled Boyd in a bilingual school, Mike isn’t happy at all. So continues Mike’s struggle against anything new, hip and (maybe, just maybe) better for his daughter, his grandson or the rest of the world.

Last Man Standing has a simple premise: It’s just like Home Improvement, but instead of raising three sons, Allen is charged with figuring out his three daughters. Allen plays a quasi mountain man, operating a store geared toward outdoor sportsmen, and everything about the show is nestled neatly into Allen’s wheelhouse. However, the show has floundered for the last two seasons, not quite finding the stellar ratings it had no doubt hoped for during its Friday night time slot. It’s hard to last on Friday nights: Potential viewers have better things to do, especially in the fall. Last Man Standing is a family show, and plenty of its target audience is no doubt spending its Friday nights at the high school football game. We still love Allen, as well as the rest of the cast, and we hope Duck Dynasty‘s guest appearance on this premiere will help boost ratings for the rest of the season and send Last Man Standing into a Season 4.

Get TV news delivered to your inbox: Sign up for our newsletter, Jack! >>