Two Saved by the Bell stars prove they’re still friends after all of these years. Mario Lopez and Elizabeth Berkley reunite on the set of Extra. 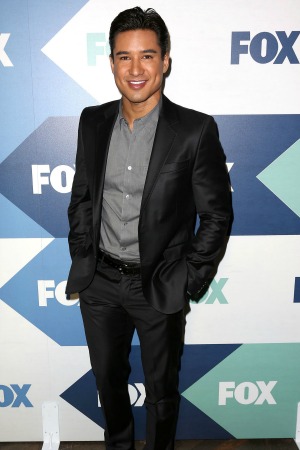 Season 17 of Dancing with the Stars is providing Saved by the Bell fans with plenty of reunion opportunities. Leah Remini and Elizabeth Berkley are both twirling on the dance floor in hopes of winning that mirror-ball trophy. Now Berkley has been brought back together with her Saturday morning co-star Mario Lopez.

The 41-year-old actress visited the set of Extra at the Universal Studios Hollywood lot. The duo played sweethearts Jesse Spano and A.C. Slater for four seasons on the beloved ’90s show. The two have barely changed since their days at Bayside High.

Lopez tweeted about Berkley’s visit and shared a photo with his followers.

Not to be outdone, the dancing contestant shared a “Throwback Thursday” photo from their days on the show with very dated fashions including big hair, huge earrings and busy print shirts.

The two have remained close throughout the years. In fact, Berkley supported the 39-year-old TV personality during his own stint on ABC’s reality show. He competed with pro partner Karina Smirnoff in Season 3 where he finished in second place.

Even though Jesse and A.C. didn’t wind up together, they each have lovely families of their own in real life. Berkley is married to Ralph Lauren’s nephew Greg and they have a 13-month-old son Sky Cole together.

Lopez just had his second child with his wife Courtney Mazza. They are proud parents to daughter Gia, 3, and newborn son Dominic.