Model and former Splash star Katherine Webb has split from college footballer A.J. McCarron, according to her mother. Her rep is telling a different story, though. 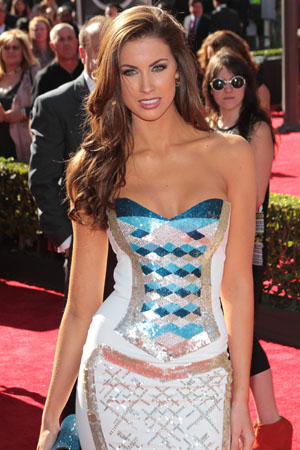 It looks like Katherine Webb is about to make a splash in the dating pool, too. The model’s mother confirmed that Webb has split from Alabama Crimson Tide football star A.J. McCarron.

The split comes after Maxim hometown hottie contestant Margaret Wood told the website that she feels “really bad” for staying with the star quarterback.

“I’ve known AJ for a long time,” Wood told Radar, adding that she knew McCarron before Webb came into the picture. “He asked for my number back in the fall when I was on the sidelines at the Ole Miss-Alabama game. I didn’t even know who he was. I had no idea he was even talking to Katherine. I thought he was cute.”

She was even planning a trip to see him — and then ESPN analyst Brent Musburger introduced Webb to the world as McCarron’s girlfriend at the 2013 BCS National Championship game.

“I was making plans to go see him, and then I saw on ESPN about Katherine. I was like, whatever, thanks for telling me,” Wood added. “But it’s not like he had to tell me, I guess, since it wasn’t serious like that. I’ve kissed AJ, but it’s not a big deal.”

But, have they done more? She alluded to it, telling Radar that they later hung out at his house.

Despite that, Wood told Radar that “the last thing I wanted was to cause any drama. This all makes me looks like some hooch and I’ve known AJ for a long time.”

Is the blond model the reason for the split? Maybe, though Webb’s rep said she’s still very much with the sports star.

“AJ and Katherine have not broken up…,” the rep told Radar. “The fact of the matter is Katherine is busy working (she is currently in NYC for a fashion shoot) and AJ is in the middle of the college football season on the #1 team in America.”

Read on for more celebrity breakups