Is Barbara Walters a secret Scientologist? That might be going a little far, but the seasoned journalist is being criticized for defending the controversial religion by a woman who barely escaped — and happens to be the leader’s niece. 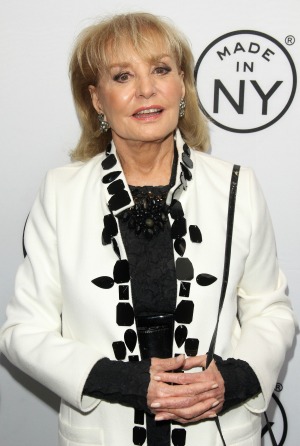 Barbara Walters is under fire for defending Scientology practices on The View this week.

While discussing how Jaden Smith — who attended a school whose curriculum was based on Scientology teachings — encouraged kids to drop out to improve society, Walters defended the educational practices of the controversial religion.

“I’m not going to speak about Scientology in general, but Scientology has a pretty good educational program,” Walters said. “They’re not telling people to drop out.”

“I have been to some of the Scientology schools and some of their education programs are very good,” she continued. “The last thing I want to do is to argue about Scientology.”

But Jenna Miscavige Hill, the niece of Scientology leader David Miscavige and author of Beyond Belief: My Secret Life Inside Scientology and My Harrowing Escape, begs to differ. She appeared on The View last February to discuss her book and revealed she was pulled out of school and forced into construction work, and has now released a statement slamming Walters for her “ignorant” opinion.

“With all due respect, saying that Scientology has a very good education system is an incredibly ignorant and irresponsible thing to say on your platform and for that reason I feel that I have to say something about it,” she said in a statement to the Scientology watchdog website The Underground Bunker.

“The leader of Scientology, Tom Cruise’s best man, my uncle David Miscavige, is a high school dropout. What does that say about the value Scientology puts on education? Is this not what Jaden Smith is advocating?”

“…I myself was born into Scientology. And instead of being properly educated, I was indoctrinated into Scientology and made to do heavy labor daily from the age of six years old. I have no high school education, and college was never even a vague possibility for me until I escaped,” Miscavige continued.

“I don’t know what propaganda you have seen or what your celebrity advocate friends have told you, but it’s time to look a little deeper. If you don’t want to know the truth (which I gather is the case from you saying you ‘don’t want to talk about Scientology’) then please refrain from praising a system you clearly know nothing about.”

“Although Scientology’s educational system is one of its most disconcerting aspects because it involves children, it is just the tip of the iceberg when it comes to Scientology’s deception and abuse.”

Walters, well known for her celebrity interviews, has friendly relationships with many Hollywood Scientologists, most notably Tom Cruise.