Miley Cyrus has certainly shocked fans with her latest controversial and naked antics. But she was the one to be shocked when Liam Hemsworth moved on from her with a new girl just one day after their split. 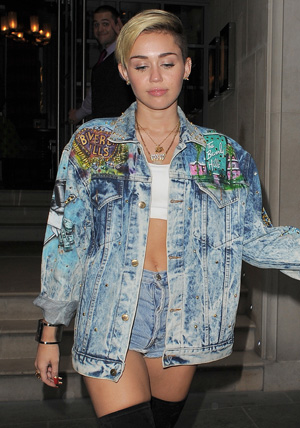 Only a day after their breakup was announced, Liam Hemsworth managed to shock his controversial ex-fiancée, Miley Cyrus, by kissing another woman, and Cyrus is reportedly not happy about it at all.

When photos of Hemsworth kissing Mexican singer/actress Eiza Gonzalez hit the web, Cyrus was upset that her now-ex-fiancé would move on so quickly after their breakup was announced.

“She knows Liam has been seeing Eiza and it’s been hard for her,” a source in the know told People magazine. “She can’t believe he moved on so fast and so publicly.”

Not only that, but Hemsworth and Gonzalez became inseparable for two days in a row after meeting for the first time this weekend in Las Vegas. Apparently, the two hit it off quite well, and Hemsworth even dropped off a suitcase at her apartment right before their kissing session started.

However, a coy Gonzalez wouldn’t answer any questions about her new beau when she was in Mexico promoting the new DVD release of The Croods, in which she did a Spanish voice-over. When she was asked if Hemsworth was one of the highlights of living in Los Angeles, she avoided a direct answer.

“Los Angeles is a city that energizes me. The city is constantly growing and has a great movie culture,” Gonzalez said. “Right now, my job is my happiness and I am very happy.”

Gonzalez also said that she “didn’t feel attacked at all” when asked about the paparazzi going after her due to her liaisons with Hemsworth. But she added, “I have nothing to say about the matter,” when further prodded on the issue.

Meanwhile, Cyrus will be hitting Las Vegas herself where she’ll be performing at the iHeartRadio Music Festival. The newly single singer is also continuing her naked campaign by posting a series of alternate Bangerz album covers where she appears without a top.