Lorde have mercy! Forget Miley Cyrus, Lorde has her own wrecking ball and she’s on a rampage with shuttling out hits. But aren’t you the least bit curious to see if her second single is as good as “Royals”? 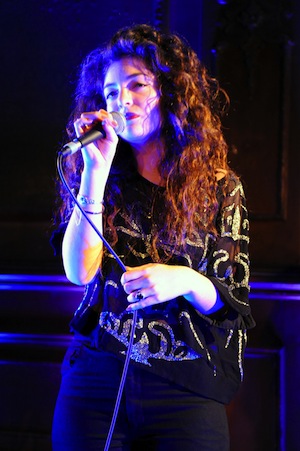 She has all the appeal of a young and fresh Lana Del Rey, but the X Factor of our precious Adele. Her music has got everyone trying to get hip to her laid-back vocals and style.

Billboard calls the track a “darkly melodic tune” and quoted the songstress, “In that song, there are a few lines which are kind of me being the ‘realistic’ pop star.” She then goes on to represent her country, New Zealand, and discusses how it’s generally not a place people are familiar with relative to other locales like New York. But what does that even mean, you ask? My interpretation is that there is so much to learn, so much to see, and what we’ve been conditioned to see isn’t all there is.

Whatever the right interpretation is, how can Lorde be so young, so grounded and so profound? I’m tickled by her attitude. And watch out, Taylor Swift, this girl writes her own lyrics too.

“Team,” the second release after “Royals,” is proving to be a solid follow-up, giving the fiery haired girl dimension.

Just when you were tempted to confine the “Royals” singer to one style, she drops a song that proves her massive versatility. Can you imagine her with an electronic flare? How about rock? Well, combine those two with her laid-back pop and you have “Team.” Can someone’s genre be “alternative pop dance?” We’ll see. This song features a strong message with an even stronger talent backing it up.

Want to know all the updates on your favorite emerging artists? Sign up for the newsletter here >>

Oh, after hearing this, I can’t imagine how good her album Pure Heroine is going to be. It’s out Sept. 30. Subtract 15 from 30 and you’ve got how old this starlet is. And that means she’s got one heck of a career out of the gate.