There doesn’t seem to be a quick resolution to the end of Bethenny Frankel and Jason Hoppy’s marriage. On Thursday, their divorce proceedings took an ugly turn. 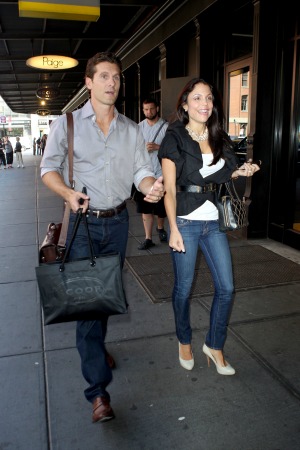 An already difficult divorce just took a turn for the worse as Bethenny Frankel and Jason Hoppy duke it out in court. On Thursday, TMZ revealed that Hoppy had been recording Frankel since their separation in 2012.

Sources told the gossip site that her soon-to-be ex recorded audio and video of the talk show host. In addition, he also took the time to record their nanny and the Skinny Girl staff who work in Frankel’s office at their shared apartment in Manhattan.

It didn’t end there, though. Hoppy also managed to hack into the emails of his ex-wife and her staff. According to the source, Frankel never recorded him.

Those revelations forced the judge to ban the couple from using tape recorders, computers and cell phones to record each other or their nanny. It’s also no surprise that the former reality stars were ordered to stay away from each other’s email accounts.

They must turn over any video or audio recordings to the judge by Oct. 15.

The marriage that started with such happiness has turned a dark corner with couple fighting over custody of their daughter Bryn. Even though a prenuptial agreement is in place to protect Frankel’s Skinny Girl empire, they are both still residing together in their custom-built Tribeca condo.

On a recent episode of Watch What Happens Live with Andy Cohen, Frankel shared that it has been a “very difficult time” dealing with Hoppy while trying to launch her new talk show.

Their “fundamental differences” are the reason their two-year marriage is coming to an end.

Frankel is currently seeking sole custody of their daughter while Hoppy has filed for joint custody of Bryn. A divorce trial is expected to begin before the end of the year if they don’t reach an amicable agreement.