As a thank-you to fans, AMC goes back in time by releasing a season finale poster featuring a stark image of the RV where Walt and Jesse got their start cooking meth. 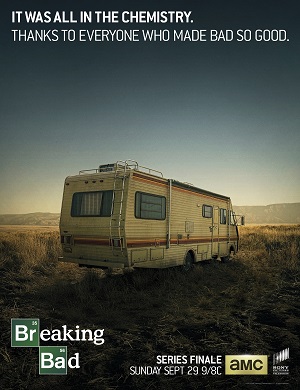 “It was all in the chemistry. Thanks to everyone who made bad so good.”

It’s a simple yet very profound statement of gratitude to the millions of fans who have stood by in awe for five seasons as innocent schoolteacher Walter White (Bryan Cranston) took a chilling walk off a very dark cliff to the underbelly of the drug world.

The fans deliver with ratings

Last week, the ratings for “Ozymandias” were at an all-time high, with 6.4 million people watching, 4.1 million of which were in the coveted 18-49 demographic. It’s not too much of a stretch to imagine that the next two episodes, the final two episodes, will deliver ratings surpassing those numbers, even if some experts believe “Ozymandias” got a boost due to an NFL football rain delay. Those people obviously don’t follow the same crowds we TV aficionados do. After all, it was only the beginning of September when these same experts were wondering if it was a good idea to end Breaking Bad considering the second half of Season 5 was up in total viewers by a whopping 47 percent and that was with a measly 2.8 million viewers.

AMC gives back to the fans with extended episodes

The undying devotion of the fans was rewarded yesterday when Breaking Bad executive producer Peter Gould shared some good news on Twitter:

An immediate debate ensued about how many of those extra minutes would be money in the pockets of AMC execs by way of extra commercials, but the die-hard fans were not put off. Series creator Vince Gilligan had previously confirmed they filmed an additional six minutes for each of the last two episodes.

How will the chemistry play out?

As Breaking Bad races toward its climax, the relationship hanging in the balance is the one between Walter White and Jesse Pinkman (Aaron Paul), Walter’s former friend and partner. It was their on-screen chemistry that made the events in the series so believable. With Jesse being kidnapped — along with Walter’s barrels of cash — by white supremacists, might the poster tease a change of heart in Walter and possibly indicate he’s willing to consider coming to the aid of his old friend? Or will Jesse break free and put an end to the man responsible for taking his life to the deep end of despair?

The best we can do is tune in to find out.