A much smaller version of Christina Aguilera appeared on The Tonight Show with Jay Leno Wednesday night as the singer continues to slim down dramatically. 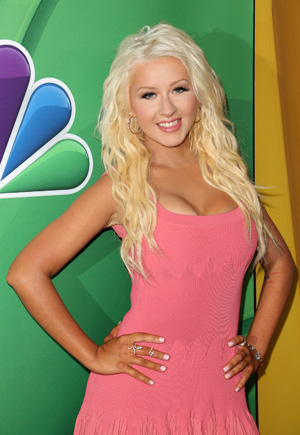 No more thunder thighs for Christina Aguilera after the “Drrrty” singer looked skinnier than ever during her appearance on the Tonight Show with Jay Leno Wednesday, Sept. 18.

Aguilera looked amazing as she showed off a much slimmer and toned body after losing a ton of weight in the past several months. Wearing a short, low-cut black dress that efficiently accentuated her assets, The Voice judge appeared even thinner than she has recently upon embarking on a total makeover.

The 32-year-old pop star had received serious backlash in the past couple of years for letting herself go and looking less than fab in various concert performances. But Aguilera believes in being comfortable and not focusing too much on looking sexy.

“I’m such a down-to-earth girl, I’m comfortable in just a jersey and boy’s underwear. Trying too hard to be sexy is the worst thing you can do,” Aguilera told Maxim magazine in a recent interview. “Sexiness should be effortless.”

Christina Aguilera has no love for The Biebs >>

However, Aguilera has definitely been doing something to slim down and look better, and amazed her fans when she looked much thinner during The Voice Season 4 premiere this March. The singer has been working with fitness guru Tee Sorge, doing lots of yoga and strength training. “[Aguilera] believes in exercise that she enjoys, doing strength work as opposed to intense cardio,” a source told Us Weekly magazine.

Admitting that she does now “feel sexier than ever,” Aguilera said it’s more about her state of mind at this point in her life because at 32, she knows what she wants.

Looking forward to Season 5 of The Voice, Aguilera told Jay Leno that she was happy to come back for another round on the singing competition. Saying that her co-judges are “fun,” she feels like returning to the show is “like coming back to school” for her.

“There’s something about the four of us getting together,” she added. “We can’t be serious for more than 30 seconds. The guys make me laugh.”