Britney Spears is supporting her fellow former Disney princess Miley Cyrus — and one celeb who criticized her is sorry for ever opening her mouth. 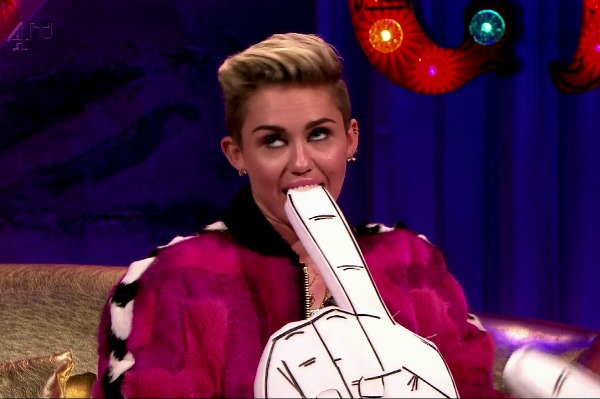 Miley Cyrus has at least one person who still loves her: Fellow Disney alum Britney Spears.

Spears, who is no stranger to raunchy performances herself, commented on Cyrus’ wild act at the 2013 MTV VMAs during an appearance on Good Morning America earlier this week to announce her upcoming Las Vegas residency.

“I think anytime you do a performance that is that memorable, you’re going to have criticism,” she explained. “I think she’s doing her thing. She’s being herself, so I give props to her.”

Spears and Cyrus and practically BFFs now, at least in entertainment terms. The two recorded a duet called “SMS (Bangerz)” that will appear on Cyrus’ upcoming album.

Cyrus had been heavily criticized by fellow singers P!nk, Elton John and Cher for her raunchy performance at the VMAs, and Cher went even further in an interview with USA Today, ripping Cyrus’ body, dancing and oral hygiene.

“I’m not old-fashioned. She could have come out naked, and if she’d just rocked the house, I would have said, ‘You go, girl.’ It just wasn’t done well,” Cher said. “She can’t dance, her body looked like hell, the song wasn’t great, one cheek was hanging out. And, chick, don’t stick out your tongue if it’s coated.”

But now the icon wishes she could turn back time and take back all those words that hurt the young star. In a stream of tweets, Cher apologized for voicing her negative opinion in such a public way.

“Re:Miley S….I Think What I Think,but Having Said That…I’m a little ashamed (which is Total bulls***,how can u B a LITTLE ASHAMED) that I didn’t keep my big Opinionated mouth Shut.WTF is MY PROBLEM ! I’m 2 Old to fall prey 2″Tell us, Oh wise 1,What did YOU think of M.S ?” she wrote.

“What I should have said,”I didn’t like it that much,but she’s Pushing The Envelope,being an ARTIST ! She’s Talented,& DIDNT COMMIT A FELONY. But somehow my ego had 2 get ITS 2 CENTS IN! MY BIG A** ‘BAD’,I DIDNT SUPPORT A FELLOW ARTIST. TRUTHFULLY SHE WAS Fkng BRILLIANT..CAUSE… WE’RE STILL TALKING ABOUT IT.”

“Ps this is Not an apology 4 what I Thought,its a Reminder,that if I don’t practice my principles,I loose Them,” she finished.

We have a feeling that despite the haters and her recent breakup with former fiancé Liam Hemsworth, Cyrus isn’t spending her days crying in her Red Bull. Her new song “Wrecking Ball” is already tearing up the charts.