Jennifer Garner gave the paparazzi a taste of their own medicine over the weekend. 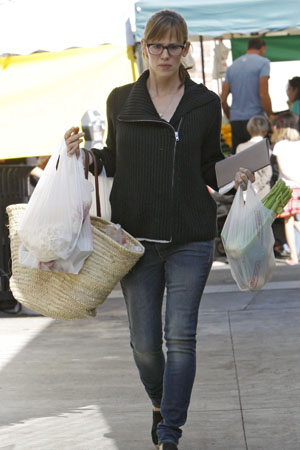 The paparazzi are a constant presence in actress Jennifer Garner’s life and they don’t stop shooting photos when she’s out with her three children. The mom of Samuel, Violet and Seraphina is tired of it, so she took matters into her own hands during a weekend trip to the market.

The former Alias star flipped the camera on the paparazzo snapping pictures of her family at a Pacific Palisades, California, farmer’s market, according to ABC News.

We’ll call the camera phone pic evidence in the actress’ continued crusade against the ever-present band of photographers. Ben Affleck’s wife recently teamed up with Halle Berry to lobby California lawmakers for stricter laws regarding the filming of children.

Garner painted a scary picture of photographer behavior in her testimony.

Jennifer Garner finally dishes on what ended her first marriage >>

“Paparazzi swarm, large aggressive men swarm us causing a mob scene, yelling, jockeying for position, crowding around the kids while running over other parents and children unfortunate enough to be nearby, including one poor three year old who was knocked to the ground by one of our paparazzi cameras outside my kids preschool,” Garner said. “My 17-month-old baby is terrified and cries and my 4-year-old says ‘why do they never smile and never go away,’ they are always with us.”

It’s not just paparazzi she worries about. Garner also recalled a scary incident when a man blended in with photographers in order to threaten her unborn children.

“There are violent, mentally-ill stalkers who can now get close to my kids by simply following mobs of photographers and blending in. Like the very man who threatened to cut the babies out of my belly, who was arrested waiting behind our daughter’s preschool, standing among the throng of paparazzi,” she said. “That man is still in prison but I have no doubt there are others still out there like him and I don’t want to make it any easier for them to find and reach my children.”