Leah Remini has been going through a dramatic time in her personal life. Her best friend Jennifer Lopez is sticking by her every step of the way. 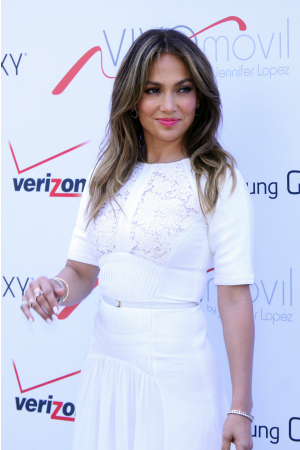 Dancing with the Stars came back on Monday night with a new attitude and with some pretty big celebrities in attendance. The Glee cast was there to support Amber Riley, the Osbourne family cheered on Jack Osbourne and Jennifer Lopez stopped by to see her pal Leah Remini.

According to the Daily Mail, JLo and her boyfriend Casper Smart drove onto the studio lot in the singer’s white Bentley. They sat at the front of the studio audience throughout the show and cheered on Remini who danced the foxtrot with pro partner Tony Dovolani.

The strong show of support was important to the former King of Queens star who very publicly left Scientology after growing up in the church. The 43-year-old actress found herself abandoned by many of her friends who still follow the religion.

Her sister Nicole Remini Winslow talked to People about her sister’s ordeal.

She said, “None of her Scientology friends are sticking by her side. I guess you really learn who your friends are.”

Lopez, who has dabbled with Scientology in the past, firmly remains in her friend’s corner.

The “On The Floor” singer even tweeted to her fans about how proud she was of her BFF’s accomplishments.

While Remini and JLo are keeping their friendship going, it appears fellow Scientologists like Kirstie Alley are keeping their distance. It’s alleged that Alley was throwing shade at Remini via Twitter when she initially left the church.

It’s good to see that the former talk-show host has support because the judges scored her in the middle of the pack. She managed to score 21 out of 30 points, so let’s hope that “Jenny from the Block” gave her the incentive to go for that mirror ball trophy.