Justin Bieber tried to look grown up by going shirtless while singing in the new Maejor Ali rap video for “Lolly.” 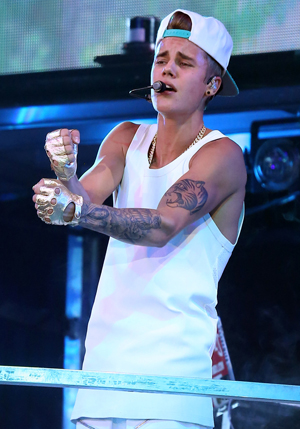 Gone are the days when Justin Bieber sang sweet songs for his young adoring and devoted fans. The young singer has apparently moved on to a more manly look and went topless while rapping in the “Lolly” video.

Performing under his alter ego, Shawty Mane, Bieber took his shirt off to rap in Maejor Ali’s new track, “Lolly,” showing a slew of tattoos on his upper body that have been increasing in number lately. The video shows the 19-year-old singer rapping along with Ali and fellow rapper Juicy J amidst a bunch of other dancers who appear in neon-colored clips.

The lyrics for “Lolly,” which include snippets such as “Fifty for the necklace, look down at my set list, got your girlfriend at my crib watching Netflix,” and “She said she liked my lollypop,” are clearly worlds away from Bieber’s usual “cutesy” songs. But, of course, younger audiences are still going to listen to the song and watch the video. However, the rappers did a good job of disguising the real meaning of the song by featuring lots of colorful candy lollypops throughout the video.

In an earlier interview with MTV, Juicy J said that Ali approached him to do a verse on the song, telling him Bieber had also collaborated. “He was like ‘Man, I think this would be crazy… me, you and Justin Bieber,’ which I thought was a great idea too.”

Proof that Austin Mahone is moving in on Justin Bieber >>

The popular rapper added that the song has shocked a lot of people. “They’re like ‘What the… ?’ He sent me the instrumental and I did my verse to it.”

Meanwhile, the song has proved to be a good attempt for Bieber as it is already in the top 10 on the iTunes chart. Happy at the song’s success, the Biebs has been tweeting up a storm about it.

“It’s here @MAEJORALI @therealjuicyj! . Now everyone do that dance.” Bieber posted, then added, “Who know the #lollydance?” and “I see u. #lollydance”

But, while “Lolly” has seen success among Bieber’s young audience, others have less-than-nice things to say about Bieber and the new video. The Los Angeles Times’ Gerrick D. Kennedy called the would-be-rapper’s appearance “cringe-worthy,” adding that Bieber’s “transition from cute tween-pop star to adult heartthrob” is a bit confusing if not entertaining.

Kennedy also called Bieber’s rapping “frightfully horrendous,” and denounced his references to “Molly” — which is the street name for Ecstasy — on his part of the song.

You can watch the Lolly video below.