If recent images of Liam Hemsworth and Eiza González are anything to go by, it would seem that ex-fiancée Miley Cyrus has already been forgotten. 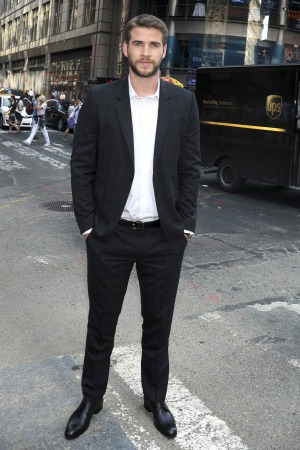 Actor Liam Hemsworth and twerking sensation Miley Cyrus have had a very tumultuous relationship, and on Tuesday the news broke that the pair have finally called off their 15-month engagement.

Just hours after announcing their split, Liam was a bad boy and was spotted moving along with a new woman, Mexican singer and actress Eiza González!

E! Online managed to get its hands on a very juicy picture of Hemsworth locking lips with his new flame outside her Beverly Hills, California, apartment.

The picture was snapped shortly after the new couple were seen out in Vegas enjoying a night of partying together at Wynn Resort XS Nightclub and reportedly left the club together at 2 a.m. and drove away in Hemsworth’s SUV.

E! has reported that Hemsworth stopped by the Mexican beauty’s apartment just after 3:30 p.m. to give her a piece of luggage and was there for around 5 minutes, chatting closely before the pair locked lips.

So, who is the girl who has already snapped up the hottie from The Hunger Games? According to E! González starred in a Mexican telenovela about a modern-day Cinderella, and has since recorded two albums that were based on the show. Sounds a little like Cyrus and her teenage Hannah Montana days, right?

The pair are rumored to have only met in Las Vegas over the weekend, when the actor was in town for the Floyd Mayweather-Saul Alvarez fight.

Gonzalez reportedly just moved to the U.S. two weeks ago, and while she left Mexico to pursue a career in American films, she also has managed to nab an American hottie! Although she is rather beautiful herself as her Instagram images reveal.

https://instagram.com/p/dsHkJWPdai
While the pair may have just met, they do seem to be getting on rather well, if the images that are surfacing are anything to go by…

We wonder what Cyrus has to say about her ex-fiancé’s activities? We already know she has unfollowed him on Twitter!