Parkland pushes Zac Efron to his limit. The actor stars alongside Oscar winners and Hollywood veterans in the historical drama. In the following clip, Efron has a date with destiny that changes his character forever. 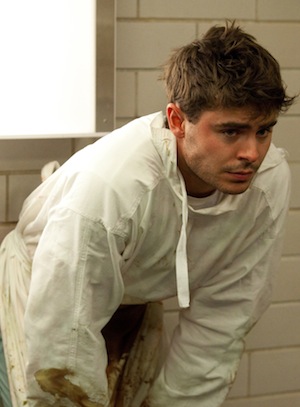 Zac Efron continues to take his career in the right direction. The former High School Musical star has a plum role in next month’s Parkland. It’s a period piece centered around one of the most tumultuous moments in American history — the assassination of President John. F. Kennedy.

Was Zac Efron in rehab earlier this year? >>

Efron plays Dr. Charles James Carrico, one of the young medical professionals who attempted to save the president’s life. There’s also Giamatti as Abraham Zapruder, a spectator who shot the most famous home video of all time. With his hand-held camera, he accidentally documented the hit that took President Kennedy’s life.

Sex scenes with Zac Efron for The Lucky One? “No big deal” >>

In the following clip, Efron’s Dr. Carrico meets his unexpected patient. He flexes his acting muscles as he illustrates shock, horror and confusion.

Is it just us, or does Efron channel a young Leonardo DiCaprio here? It’s no secret that he’s purposely strayed away from his Disney origin. This is a great display of Efron’s talent.

In case you missed it, here’s the full-length trailer:

Will you be seeing Parkland next month?