As a special treat, a happy newlywed couple got graced by Brad Pitt’s presence at their wedding in England. 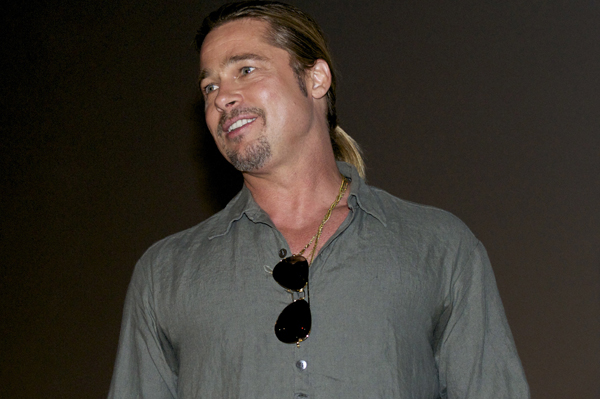 Not everyone can brag they’ve had famous guests at their wedding, but for a British couple that’s exactly what they got when Brad Pitt unintentionally crashed their wedding reception.

The handsome actor was at the Maidenhead Hotel in Berkshire, England for some work-related meetings when he decided to go to the bar. There, newly minted husband Daniel Lingwood was enjoying his wedding reception when he spotted the super-famous star and quickly went to get his bride.

Brad Pitt lets loose on a night out >>

“My husband said to me Brad Pitt was at the bar and you have to go come with me, so he dragged me across the hotel,” Lingwood’s bride, Abi, told the Maidenhead Advertiser. “I thought he was joking.”

Of course, this called for a photo op and the couple didn’t shy away from asking the World War Z star to pose with them.

“[Pitt] said sure, no problem, and said congratulations and I hope you have had a great day and let’s have a picture,” Abi said. “And he said I looked nice… He was really nice.”

Once the couple’s friends, especially the ladies, got wind that Pitt had joined the wedding festivities, they went crazy and swarmed the actor for their own photos with him.

“The girls were going wild and mental so Brad Pitt and the people he was with went upstairs to a room for their meeting,” Abi said adding that she saw Pitt again the next morning at the lobby of the same hotel.

The new bride, who works as a sales executive for BMW, said the news has “gone global in BMW and has become more of a talking point than my wedding, but that’s fine.”

Pitt has been filming his new movie, a World War II thriller titled Fury, at Pinewood Studios in England, and apparently has his meetings with executives at the Maidenhead Hotel.

Apparently, this was not the first time people were caught off-guard by Pitt’s appearance. Just this past May, the 49-year-old father of six surprised moviegoers at an advanced screening of World War Z in Hoboken, New Jersey.