Olivia Wilde reveals that she’s the one who pursued a relationship with former Saturday Night Live star Jason Sudeikis. 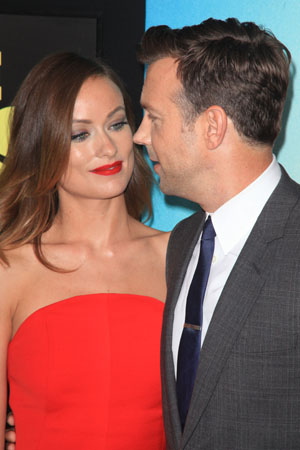 Jason Sudeikis might seem like a super-confident funnyman, but Olivia Wilde had to take the reins in order to start their relationship.

“I met Jason, and I thought he was so charming. He’s a great dancer and I’m a sucker for great dancers. But he didn’t even get my number,” the Rush actress tells Allure in a new interview.

Luckily, it wasn’t the last time they bumped into each other at events.

“Over the next six months we kept running into each other. [One night], my best guy friend walked up to him and said, ‘This is Olivia’s number. Use it.’ That was the beginning,” she adds.

It’s hard not to love a gutsy woman who goes after what she wants, whether it’s the corner office or that cute guy at the gym. The problem: It’s easier said than done. So, how can you pull off an Olivia and pursue the object of your affection?

“The most important thing for folks to remember is that fear of rejection is normal,” advises Dr. Holly Cox, Ph.D., a North Carolina–based psychotherapist.

“Feeling anxious about approaching a new person is not a commentary on your self-esteem or an indicator that something is amiss emotionally. Any normal person gets the jitters in unfamiliar situations. Guys are nervous, too, when they ask us out on dates.”

Dr. Cox adds that one way to “soften the blow” around rejection is to create an ideal situation — or as much of one as possible.

“One thing you can try is harnessing the power of technology,” says Dr. Cox. “Though technology can often serve to lessen the immediacy and quality of our contacts with other folks, in the case of arranging social time with a guy you’re interested in, it can be a lifesaver. You can plan a group outing and invite your romantic interest plus other folks via social networking, email or text to create a social cushion for getting to know one another.”

Or, just get your friend to do the dirty work, as Wilde did.

Did you ask him out the first time? Sound off below!

More on dating and relationships

Why skinny chicks don’t always get the guy
How to spectacularly screw up your relationship
Dating questions answered: How do I know if he likes me?