Robert Pattinson says he’s the sensitive type in relationships and cuts people loose if they do something he can’t deal with. He’s also quite the gift giver. 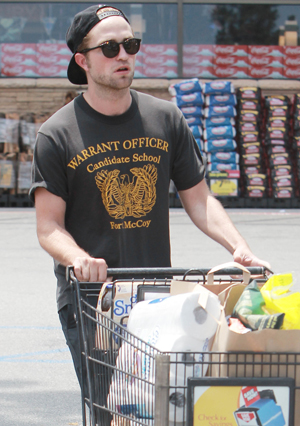 When Kristen Stewart cheated on Robert Pattinson it probably affected him more than fans realized. The Twilight hunk revealed that he’s a very sensitive person when it comes to relationships and will cut someone out if he can’t handle something they’ve done. Plus, he also admitted he loves giving presents!

Speaking to Australia’s Sunday Style magazine, Pattinson gave a bit of insight into how he deals with romantic relationships. “I’m quite sensitive,” he revealed, then went on to add a few more snippets about what he’s like as a boyfriend.

“I do like a bit of grand gesturing, but that’s just my ego,” Pattinson told the magazine. “I like to give people presents and I think of myself as the best gift giver, but only because I get stuff for myself and then make it work for the other person.”

The 27-year-old Cosmopolis star also divulged his forgiving ways, although sometimes there are things he just can’t get past, which possibly explains his reasons for finally breaking up with Stewart.

“There’s not very much that bothers me… I don’t ever feel the need to forgive or expect people to be,” Pattinson added. “I judge people on their actions. I don’t really care if it’s wrong or right, I give them the benefit of the doubt. If they do something I can’t be bothered or deal with, I just cut them out.”

Pattinson also went on to talk about his panicky ways before red-carpet events due to his heavy insecurities. “I get a ton of anxiety, right up to the second I get out of the car to the event,” he admitted.

“Body dysmorphia, overall tremendous anxiety,” the Maps to the Stars actor went on. “I don’t have a six-pack and I hate going to the gym. I’ve been like that my whole life. I never want to take my shirt off.”

However, Pattinson thinks that he can “feel people looking” at him differently now that he’s done the Dior Homme campaign and starred in movies other than Twilight.

“It’s a weird year,” said Pattinson. “With Twilight ending and other films I’ve done, like Cosmopolis, I suddenly feel like I’m being treated like an actual actor.”

Robert Pattinson basically tells fans to get a life >>

Of course, he really isn’t Pattinson unless he throws a bit of humor into his interviews. When asked why he chose to do the Dior Homme ads after swearing up and down he’d never do fragrance commercials, he said, “I just got so smelly that I had to start wearing it.”

Somehow, it seems unlikely that Pattinson could ever smell bad, not even during his bad, unwashed hair days of the past!