Fergie and Josh Duhamel introduce us to the latest member of the Duhamel family, Axl Jack Duhamel! 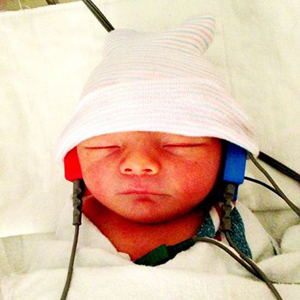 Fergie and Josh Duhamel announced the singer’s pregnancy on Facebook, so it’s only fitting that the famous pair also introduced the baby to the world via the social media site.

Duhamel posted a different shot on his official page. His shows the newborn just hours after his birth — and the new dad added his own snarky caption aimed toward the persistent photographers perched outside his property.

The singer and her actor husband have been relatively quiet on their social media accounts since Axl’s birth. It wasn’t entirely unexpected, though: Duhamel recently revealed that that he’s taking an extended break from work to spend time with his child.

Fergie and Josh Duhamel go all out for their baby shower >>

“I want to be home for at least the first several months,” Duhamel told SheKnows in July. “I have a feeling that once the baby gets here I’ll want to be with [him] all the time.”

The North Dakota native added that it’s important to them to raise their son with the same Midwestern values he learned as a child.

“I would say the actually raising of the child into becoming a good human and a thoughtful, compassionate person,” he said. “There are a lot of traps in Los Angeles or anywhere for that matter. What terrifies me of being a parent is that I just really want to instill some of the things that our parents instilled in us: respect, compassion, understand the value of things and money.”

We’re already calling it: This is going to be one of the coolest — and most grounded — kids in Hollywood!