The Diving Board is Elton John’s first solo album in seven years — and the wait has been worth it. 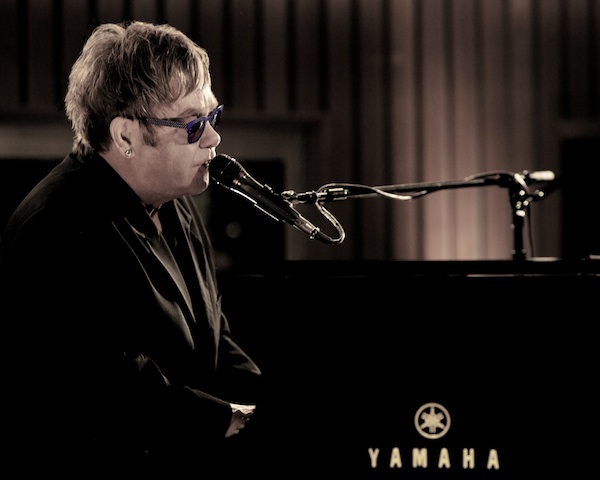 The cover art for Elton John‘s brand-new album The Diving Board shows the back of a young guy in jeans and a black T-shirt standing at the edge of the board looking down at a vast expanse of water — as if he is deciding whether or not to jump.

And with that image, Elton John is about to dive back into the music scene with his first solo album in seven years.

5 reasons why we love Elton John >>

Since his last album, the 66-year-old superstar has become the father to two boys, 2-year-old Zachary and 9-month-old Elijah with his husband David Furnish.

And it seems that fatherhood has changed the once-flamboyant performer.

The Diving Board marks a deeply personal turn in John’s solo releases. John has taken off the rose-colored, sparkly glasses (with peacock feathers on the sides) and, in collaboration with producer extraordinare T. Bone Burnett, moved his piano back to the forefront — where it should be.

As John states in the album’s press release,  “in many ways, I feel like I’m starting again, making records. I had to ask myself, ‘What kind of music do I really want to make?’, and I realized that I had to go back to go forward again. I needed to strip away the excesses and get back to the core of what I do as an artist. That’s what The Diving Board represents.”

The first single off of the album, “Home Again,” is a perfect example of John and long-time lyricist Bernie Taupin’s nostalgic look at life. Over a simple melody, Elton sings, “If I never left, I’d never had known/We all dream of leaving, but wind up in the end/Spending all our time trying to get back home again.”

Even though this album is a bit subdued, do not worry. There are plenty of upbeat moments including the gospel-tinged “Take This Dirty Water” and the Elton-meets-the-wild-West “A Town Called Jubilee,” proving that there is no pop performer out there better in front of a piano.

Elton John and The Piano Man make up >>

Elton explains, “The Diving Board is the album I’ve been waiting to make for decades.”

And in this time of pop music where it’s more about how much you can shock than the actual music, The Diving Board is certainly an album we’ve been waiting to hear.

The Diving Board will be released Sept. 24 and can be pre-ordered now on iTunes.

In the following clip, Elton’s longtime collaborator Bernie Taupin and T-Bone Burnett discuss the process of writing the lyrics to The Diving Board.