No surprises here. The monarch revelation isn’t all that game-changing within the town since we don’t know her purpose. What is most interesting about the finale is a message that comes from Alice. Don’t get too excited, she isn’t back from the dead. 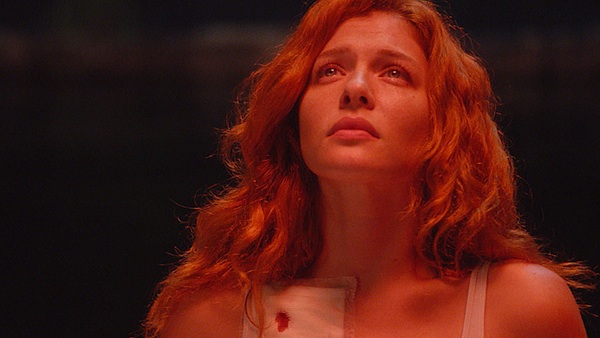 We knew not to hold our breath Monday night for anything really shocking or game-changing on the show. Under the Dome isn’t really a show that gives you big answers. Instead, it coughs something out every couple episodes, but the answers usually just bring more questions. Monday night’s season finale was no different. The show, after all, has been renewed for Season 2.

What was really surprising is that no one died in the episode. The show is a bit like watching a game of chess. Not interesting per se, but there are moments when a key piece is knocked out, which keeps you watching to see who’ll be next.

The best and worst characters of Under the Dome >>

In fact, Julia makes a startling recovery and dashes off to save her precious Barbie (Mike Vogel). She really isn’t fazed that he killed her husband. I guess under a dome, you can’t really be too picky about your partner. And he’s cute, after all.

A butterfly is born

The butterfly hatches and Linda freaks out.

Linda declares the mini dome as police property. She calls Big Jim and tells him what she’s found. Oh, Linda… she’s a special one. Then the butterfly starts freaking out and bashing itself against the sides of the dome. As it tries to get out, black spots appear and spread over the mini dome. The same thing starts to happen to the big dome as a black curtain falls over the town.

Linda gets zapped by the mini dome when she tries to touch it.

In a race to keep the mini dome away from Big Jim, the kids put their hands on it as it begins to glow. The mini dome falls apart into dirt, leaving the egg and the butterfly dead on the ground. The kids were too late to save the monarch. Or were they? Suddenly, the butterfly begins to move. Then it flies.

The butterfly drifts over to Barbie, and Joe takes it as a sign that Barbie has been chosen as the monarch. But wait! The egg begins to glow then shake. The shaking is so strong it threatens to collapse the whole building. But Julia picks up the egg, and it stops. She is the real monarch. Unfortunately, it’s hard to really feel vested with this revelation. We know nothing about what it means to be the monarch so how are we supposed to care who it is?

Big Jim gets a new toy

Big Jim gives another speech as frightened people gather at the church because the dome has gone dark, blocking out the sun. It’s another “we’re all in this together” pick-me-up.

Then he goes to build a noose with Phil’s help. Big Jim plans to hang Barbie.

Back at the barn, Linda finds the paintings Junior’s mother did and asks Big Jim what “the pink stars are falling in lines” means. Big Jim recognizes the saying as something from his wife.

Junior tries to take the egg for his father. Julia hands it off to Angie and the girls run while Barbie and Junior fight.

Norrie asks the dome what they should do next and Alice appears. Only it isn’t Alice. It’s some kind of other being (aliens?) that explains they’ve taken on human likeness to make themselves more familiar. She tells them the dome wasn’t meant as punishment. It was meant to protect the town, but she won’t tell them from what. There has to be a Season 2, after all.

Barbie is back in custody after Junior turns him in. He’s dragged out to the gallows and the noose is slipped around his neck. No Game of Thrones moments here, though.

Julia throws the egg in the lake and pink stars shoot from it, illuminating the whole town in the glow. The pink stars turn into a bright, white ball of light like a new sun.

Big Jim tries to get Junior to pull the lever, dropping Barbie to his death, but Junior doesn’t do it. Instead, his hands hover on the lever, unsure.

Pan to a view of the entire dome. And Season 1 ends.

So, will we watch Season 2? Meh, the first episode is being written by Stephen King himself so, yeah, probably. We just expect better.