We have one job: To fill your DVR with ladyporn! We think these often shirtless shows will do just the trick to turn your late nights into steamy evenings.

Plots. Substance. Moral and social commentary. Who wants that? All we want from television is to see some bare-chested men. So, we thought we’d help you out with a look at the shows most likely to go shirtless.

Hands down, The CW is the winning channel for most chances to run into a buff bod sans shirt. They’re teeming with half-naked hunks because they know there audience is mostly chicks. Though, ABC and Shonda Rhimes certainly try to appease the ladies, too. 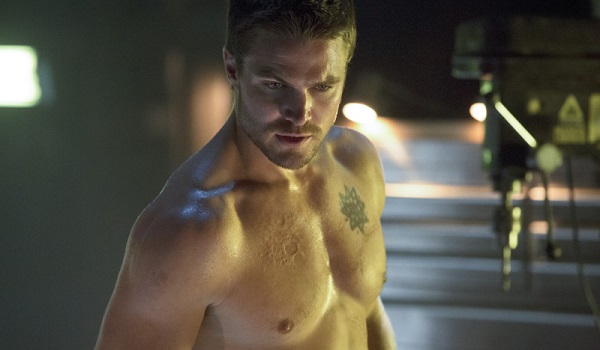 Holy moly. Remember last season’s salmon ladder incident? The CW is kicking off Season 2 with the promise of even more shirtless wonders by offering up a new poster featuring Colton Hayes, you guessed it, shirtless. Looks like Season 2 is synonymous with “shirtless, too.” We approve.

Grey’s Anatomy — ABC
The swoon factor is slowly dissipating now that McSteamy (Eric Dane) is gone. But, there’s still the ginger Hunt (Kevin McKidd), Karev (Justin Chambers) and Avery (Jesse Williams). Even McDreamy occasionally drops his scrubs still. Sure, there’s a little snow on his temples. But, that smile! Those dimples!
Beauty & The Beast — The CW

We’re certainly not watching the show for the great acting skills or chemistry between Kristin Kreuk and Jay Ryan. No, no. We’re tuning in week after week because the only thing hotter than Vincent in that pea coat is Vincent in no coat… and no sweater… and no shirt. Oh yeah. We like that scar, too.

The Originals — The CW
True story: We’ve decided The Vampire Diaries‘ Damon and Stefan keep their shirts on way too much. Luckily, from the look of those sneak peek shots at The Originals, the spin-off might do an even better job of showing some man skin. We can only hope they keep up the good work showcased in the first episode.
Chicago Fire — NBC
Here’s a little known fact: Every time Taylor Kenny takes his shirt off, an angel gets its first — *cough*. Sorry. Smoke inhalation. We may or may not stalk the Chicago Fire shooting locations for a chance to see the guys in action. (P.S. The word you were looking for is “crush.” It gets its first crush.)

There’s no secret here: If you want skin, you’ve got to go to cable. Most of our most favorite shows are currently on hiatus. However, their reruns are played ad nauseum and/or they’re available on demand. 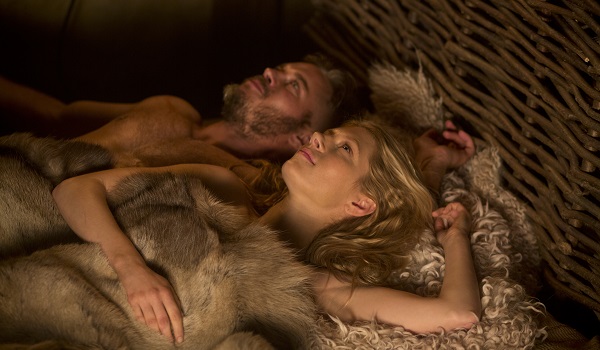 The best thing about Vikings is that there’s something for everyone. There’s violence for the guys and dirty, hot near-nekkidness for the ladies. In other words, you could watch this show with your boyfriend. You know, if you’re into that sort of thing. We love Vikings so much, we’ve been known to put on the DVR multiple times a week. Just to help us get to sleep, obviously.

Want to do a little more objectifying? See if you can match these abs with their face >>

Farm Kings — GAC
If you love Vikings, you’ll love Farm Kings. Here’s why: It’s like they took the cast of Vikings and turned them loose on a farm. The show follows four of the hottest brothers alive (who are all tall, blonde and Viking-esque) as they work their farm and sell the goods. They say they want to make farming cool again. But, they actually make farming exceptionally hot. Bonus: Sometimes GAC shows scantily clad music videos, too.
Game of Thrones — HBO
Another fine example of tons of shirtless men. The books that Game of Thrones is based on might be incredibly good, but they will always fall short for one major reason. No shirtless Jaime (Nikolaj Coster-Waldau). We would do things to him. Bad things. The kinds of things that happen at Littlefinger’s place of business. Now that Jon Snow is south of the wall, can he take his furs off, too?
Dallas — TNT

Technically, the shirtlessness doesn’t happen all that often on Dallas. However, there are two reasons why the show deserves to be on the list and their names are Josh Henderson and Jesse Metcalfe. When they do take off their shirts,  it’s worth the wait. We’re also pretty happy when they roll up their sleeves a little and show some forearm. Those boys have some excellent forearms.

Squee! Nothing makes us happier than seeing Matt Bomer take his shirt off on White Collar (except for all the times he goes shirtless and dances in Magic Mike). USA tries not to promote his hunkiness with tons of topless pics of Bomer. They try to stick to suits and fedoras. But once you’re invested in the show, you’ll recognize just how often it actually happens. And you’ll thank us.

For more TV news and features, sign up for our newsletter >>

There you have it, ladies! Keep in mind that these are just a drop in the bucket. There’s also the soon-to-end True Blood and, yes, The Vampire Diaries. We’d be here all day if we listed all of our favorite skin-showin’ shows, though. Hopefully, these offer up some new additions to your ever expanding DVR schedule. Just remember to DVR responsibly.

Images courtesy of The CW, History and GAC