In Hollywood, it’s hard to avoid dating other celebrities’ exes. It looks like Russell Brand and Hugh Grant have dipped into the same dating pool. 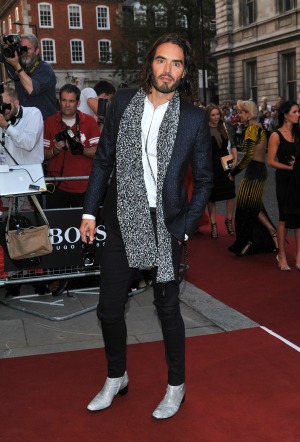 With their marriage nothing but a distant memory, both Katy Perry and Russell Brand have moved on. Perry has been on-again, off-again with musician John Mayer over the last year while Brand has chosen a new mate whose name might be familiar to some.

Over the weekend, the comedian was spotted cozying up to Hugh Grant’s ex-girlfriend, Jemima Khan, in New York City. The press has definitely been on the hunt to figure out the name of his mysterious lady-love after he talked about her in a recent op-ed piece in The Guardian.

Russell Brand dishes on sex with Katy Perry, and it’s not good >>

He wrote in British publication, “Now, I’m not typically immune to the allure of objectified women, but I am presently beleaguered by a nerdish, whirling dervish, and am eschewing all others.”

It didn’t take long for the New York paparazzi to discover the new couple. Khan, who dated Grant from 2004 to 2007, met Brand about two years ago. She asked him to write an article for her magazine, The New Statesmen.

The heiress was previously married to Pakistani politician Imran Khan. That marriage ended in 2004 after nine years together.

The budding new love has now taken to the streets of Manhattan where they were snapped arm-in-arm in the East Village on Sunday. Brand was in his usual uniform of skinny jeans and a sleeveless shirt with a scarf while Khan looked comfortable in her jeans and a simple white shirt.

This may be the right type of girl the 38-year-old needs, someone who understands his sense of humor and who isn’t in the entertainment industry. It seems like his former marriage to Perry was just a bit too dramatic for the sober actor.