Dina Lohan and daughter Lindsay Lohan were seen partying it up just days after mom got arrested for DUI. 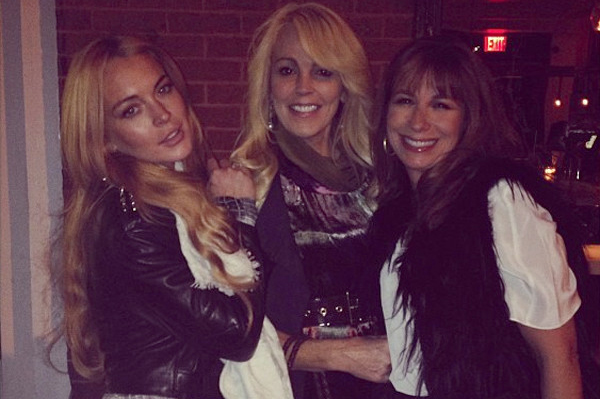 A DUI arrest won’t stop Dina Lohan from celebrating her birthday! The troubled mother was seen with her equally-troubled daughter, Lindsay Lohan, as they celebrated the Lohan matriarch’s big day over the weekend.

“Happy Birthday Mommy!!! I love you so much! @dinalohan,” Lindsay tweeted on Sunday, clearly not upset over her mom’s drunken showdown with police last week.

Joining in on the fun, was Lohan’s other daughter, Ali Lohan, brothers Cody and Michael Lohan Jr., as well as former Real Housewives of New York star Jill Zarin, who all enjoyed a fun dinner along with a few other guests. However, according to TMZ, Dina managed to have a great birthday night “without guzzling a single drop of booze,” drinking soda and water throughout the evening instead.

Dina Lohan demands a seat for her handbag >>

Lindsay and Zarin posted a few photos of the dinner bash on Instagram where the Mean Girls star and mom are looking fabulous. While the elder Lohan is still having drinking issues, 27-year-old Lindsay is now supposedly sober and turning over a new leaf in her life. Hopefully, her mom has learned her lesson and will follow in her daughter’s current footsteps.

When Lohan was pulled over by cops at 11:00 p.m. last Thursday in Long Island, she was caught with a .20 blood alcohol level, over twice the legal limit amount. During her booking at the police station, Lohan claimed that she had been hurt during her arrest, but recanted the claims when medics found no sign of injury on her.

Unlike her daughters, however, Lohan’s ex-husband, Michael Lohan, had an opinion on Lohan’s latest trouble. But, he did not necessarily condemn her, and hoped she would try and turn herself around.

“I hope it works out for the best, she’s the mother of my kids,” Michael said during an interview with Extra. “I hope they give her the option of going to treatment.”