After months of speculation, Miley Cyrus and Liam Hemsworth have officially announced they won’t be getting hitched after all. 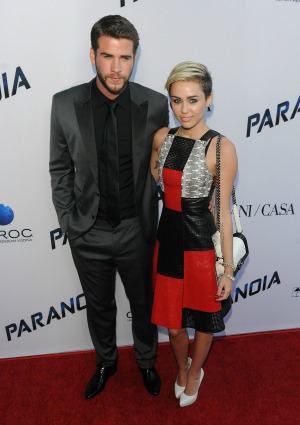 Miley Cyrus and Liam Hemsworth have officially called it quits after nearly a year of cheating rumors and squirrely behavior.

The couple, who met on the set of the 2010 flick The Last Song and got engaged in May 2012, confirmed the news to People through their reps.

An insider explained to RadarOnline, “They’ve split for now. Miley and Liam have a very tumultuous relationship and both are exhausted. It’s a complicated relationship.”

Cyrus even went so far as to unfollow Hemsworth on Twitter, signaling that the split might not be so friendly, although she has yet to comment herself on the site.

Hemsworth was said to be absolutely mortified over Cyrus’ raunchy performance with Robin Thicke at the 2013 MTV VMAs in August and had enough.

“Liam really does care about Miley, but her racy new look and sort of ghetto attitude isn’t exactly what he signed up for,” an insider told RadarOnline.

“Her VMA performance absolutely mortified him and he couldn’t be more embarrassed. He doesn’t really see anything sexy about what she did onstage.”

“It’s not just Liam that Miley is pushing away,” the source explained. “His entire team is urging him to part ways with her because she’s nothing but negative for his reputation and career.”

“Liam is a serious actor with a growing career, while Miley has just turned into a joke. It’s pretty much over. He knows he can’t stay with her when this is who she’s become,” the source added. “He doesn’t want to babysit her anymore. He has to move on.”

Of course, rumor has it that Hemsworth is no angel himself. He was rumored to have had a fling with Mad Men actress January Jones a while back, and after Cyrus’ VMAs mess sources said he started sexting with Jones again and was spotted getting cozy with a pretty brunette at the Toronto Film Festival last week — a charge his rep vehemently denied.

Of course, any gal worth her salt could have told you Cyrus and Hemsworth had already split: She did just dye her hair a dramatic dark hue, after all, and everyone knows ladies love to mess with their hair in the middle of a major life change.

3 hrs ago
by Sarah Mina Osman