Miley Cyrus and Liam Hemsworth have decided to take a break from each other and put wedding on indefinite hold, according to new reports. 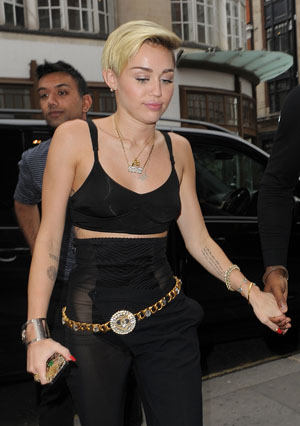 It looks like Miley Cyrus may have twerked herself out of a relationship with Liam Hemsworth, as the two are apparently on a break. Maybe seeing Cyrus naked during her scandalous “Wrecking Ball” video was too much for Hemsworth. For now, the pair has put their wedding on hold.

According to a new report from RadarOnline, the two are no longer together. “They’ve split for now,” a Radar source revealed. “Miley and Liam have a very tumultuous relationship and both are exhausted,” the insider added. “It’s a complicated relationship. The wedding is on hold for now. It’s not canceled, but it doesn’t look promising.”

The new split reports follow rumors that Hemsworth was getting cozy with a mystery woman at the Toronto Film Festival last week. Eyewitnesses at the event told the New York Post‘s Page Six that the Hunger Games star was “locking lips with a random brunette,” and that they “left together” later on. However, Hemsworth’s rep has denied these claims, saying, “There is no truth whatsoever to any of this.”

The rep has also slammed rumors that Hemsworth was “sexting” with Mad Men star January Jones, the same woman he was accused of smooching with back in February of this year.

Meanwhile, Cyrus has made her own claims about the postponed nuptials when she spoke with Harper’s Bazaar in an October issue interview. “I definitely don’t have time to deal with a wedding right now,” she said. “But I will at some point.” The question remains whether this wedding will include Hemsworth or not.

Cyrus would not comment any further on her relationship with Hemsworth, but she reportedly unfollowed him on Twitter over the weekend, adding speculation that the couple is indeed over.

The former Hannah Montana actress also admitted that she has been acting childish, and explained why she’s changed in such a drastic way.

“I was an adult when I was supposed to be a kid,” she told the magazine regarding her Disney days, “so now I’m an adult and I’m acting like a kid.”

Plus, the controversial singer claimed that she has better fashion sense than every other girl out there who wants to be fashionable. “I can be in white leggings and a white sports bra and I’m on a whole other level of s*** that those girls don’t even get yet because they don’t know how to do it.”