There’s a new Miss America today, but sadly the freshly crowned beauty queen is already defending herself against ignorance and hate. 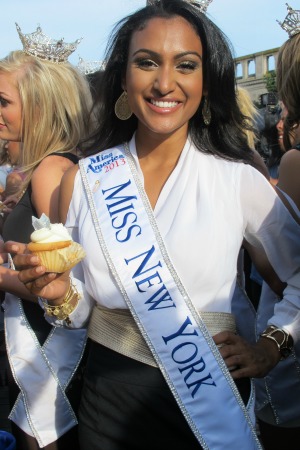 Miss American made history last night when an Indian-American took the crown for the first time, confusing Twitter racists who called the decision un-American.

Miss New York Nina Davuluri was crowned Miss America at the end of the nationally televised pageant, but sadly the Indian-American medical school hopeful was the subject of racism and ignorance almost immediately.

A look behind the Miss America crown >>

Twitter lit up with hateful comments, many of which have since been deleted after backlash from other users, with confused racists calling Davuluri an “Arab” and a “Muslim” and saying she is “not even American” because she has brown skin.

“Well they just picked a Muslim for Miss America. That must’ve made Obama happy. Maybe he had a vote,” said Twitter user EJRBuckeye.

“When will a white woman win Miss American? Ever?” wrote user FoxxiLiberal.

“Shes [sic] like not even american and she won miss america,” wrote KathrynRyan50.

“How the f*** does a foreigner win miss America? She is an Arab! #idiots” wrote user jakeamick5.

“How can you be Miss AMERICA and look like you should be a gas station clerk or motel owner?” wrote user OneProudHonkie.

“Whats happening to our country? We have a gay judging a women’s pageant, a non Christian president & non Christian winner of Miss America,” wrote user hannah_kirksey.

“I’m not a racist. She is representing America doing an Indonesian dance. If it was a Miss Universe pageant it would have been cool,” wrote user MelanieMelmagby.

The shocking statements have not deterred Davuluri from celebrating her win. The beauty queen, who said she will use the $50,000 scholarship money she won to attend medical school, used her first press conference to point out that America is about diversity.

“I’m so happy this organization has embraced diversity,” 24-year-old Nina Davuluri told press gathered in Atlantic City minutes after winning the crown. “I’m thankful there are children watching at home who can finally relate to a new Miss America.”

When told about the racist comments, she brushed them off. “I have to rise above that,” she said. “I always viewed myself as first and foremost American.”