Vin Diesel revealed his softer side a few months ago, but could his singing abilities land him a Broadway musical role? 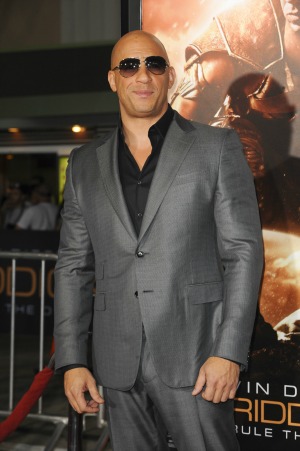 We all know Vin Diesel as being super masculine; from his bald head to his big muscles, there is certainly no messing with the actor.

So it comes as a surprise that the Riddick star has other talents that don’t really fit with his stereotype.

The talent in question happens to be the ability to sing! Diesel has apparently been receiving endless offers to star in musicals since he posted a video of himself belting out a karaoke cover of Rihanna’s hit song “Stay.”

The video has become a viral internet hit and movie executives worldwide are now taking notice of Diesel’s talents and are keen to cast the actor in roles that showcase his voice, the Daily Star reported.

So what does the actor have to say about the event? Well, it was originally his girlfriend, Paloma Jimenez, who persuaded the actor to upload the video online.

Nuts magazine quoted Diesel as he explained the event, “That was an alternative to sending a Valentine’s Day card. When my girlfriend saw it, she said, ‘You have to give that to your fans.'”

“I’d made other videos of me signing on my page before. It was no big deal. When I was singing ‘Chestnuts Roasting on an Open Fire’, no one gave a s***. Then a studio called me and said they wanted me to do a musical!”

We all know Diesel for his roles that show him playing the tough guy, having appeared in multiple manly movies such as Riddick and the Fast & Furious franchises.

It is believed that Diesel had previously lobbied to star in a movie adaptation of the Broadway musical Guys and Dolls and hopes that he may now be considered for the role after producers have heard that he can actually sing!

Diesel told Nuts magazine, “You know how long I’ve been talking about Guys and Dolls? It’s got to happen. Isn’t it funny? I do a silly little video and all of a sudden people are like, ‘Vin, would you ever consider a musical?’ I’ve been asking to do this for the last 10 years, man!”

Should be interesting to see Vin Diesel in musicals, but for now you can watch his hit video here: