Fiona Apple covers the Charlie and the Chocolate Factory classic “Pure Imagination” in an unsettling new viral video from Chipotle. 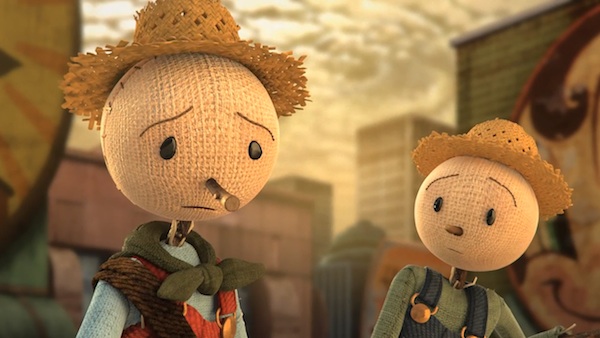 On the heels of Willie Nelson‘s cover of Coldplay‘s “The Scientist” for Chipotle’s 2011 viral video Back to the Start, Chipotle is back with a new video called The Scarecrow.

Lending her voice to the video is none other than Fiona Apple, who has recorded the most haunting and unsettling version of “Pure Imagination” we’ve ever heard.

The ominous track, however, lends itself perfectly to the video and the Mexican fast-food chain’s message.

Macklemore’s “Same Love” wins at the VMAs for its message >>

For years, Chipotle has led a crusade against large factory farms, opting for locally grown organic produce when available and humanely raised, antibiotic-free meat. Now, it has released a short animated film, The Scarecrow, promoting its new game app of the same name.

The film follows our hero scarecrow who lives in a dystopian society — where all food is processed and meat is stamped out in little steak-and-chicken shapes.

This all happens at Crow Foods, a Big Brother–type food-processing company that runs our little scarecrow’s world. As our scarecrow depressingly goes through his day at Crow Foods, he sees behind the scenes to the mistreatment of food and animals that is rampant in our food supply.

By the way, if the scared, sad animated cow eyes don’t make you cry, I’m not sure what will.

Mr. Scarecrow goes home and looks around as if to say, “There’s got to be a better way.” Behold! A red pepper grows on a vine outside his house. The little scarecrow has an idea: He will grow all of these veggies himself and make his own food, which he serves to the people of Crowville in little, red Chipotle baskets.

It’s a small store in a big Crow Foods–run world, but the little scarecrow is making a difference as a banner falls above his store stating, “Cultivate a better world.”

Chipot… I mean, the little scarecrow has saved the day from Mc… I mean, Crow Foods.

But the real story here is Fiona Apple. Everything seems more ominous with Apple’s soaringly unsettling voice belting out the words to “Pure Imagination.”

If you want to view paradise,
Simply look around and view it.
Anything you want to, do it.
Wanna change the world?
There’s nothing to it.

Apple is releasing a recorded version on iTunes, with the proceeds going to the nonprofit Chipotle Cultivation Foundation. According to its website, the foundation is “dedicated to creating a sustainable, healthful and equitable food future.”

Check out The Scarecrow below. Do you agree with Chipotle’s view of our food supply? Tell us your thoughts in the comments.