Anna Faris is busy these days. When she’s not presenting at the Emmys, she’s starring in a new sitcom and voice acting in the second installment of Cloudy with a chance of Meatballs. While Faris has a lot on her plate, Tacodiles aren’t the strangest things she’s eaten. You won’t believe which member of the rodent family her husband, Chris Pratt, killed and asked her to cook for dinner. 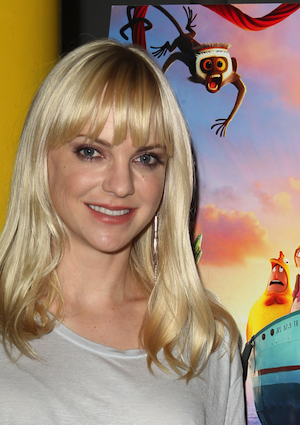 Anna Faris lends her vocal talents to meteorologist Sam Sparks in Cloudy with a Chance of Meatballs 2, where some pretty wacky food animals called “foodimals” are threatening humans. From Apple Piethons to Cheespiders, these dangerous delicacies won’t be making their way to your microwave anytime soon.

So we asked Faris if any of the foodimals sounded appetizing to her. “I like that Tacodile,” she said with delight.

When asked what it’s like working on an animated film, the blonde bombshell said, “Making an animated movie is a totally different process. It’s so humbling in way, because as voice actors we’re like .02% of the process. We pop in, we pop out and we tend not to see the animation until very late in the process. Both Bill [Hader] and I are like, ‘That’s what we were doing? That’s what a Tacodile looks like?’  It’s really fun.”

EXCLUSIVE: Cloudy with a Chance of Meatballs 2 “Foodimals”

In real life, Faris claims to be an adventurous eater, saying, “There isn’t much I won’t try.”  We didn’t know exactly how adventurous she was until she revealed her husband, actor Chris Pratt (NBC’s Parks and Rec) is a hunter.

“My husband hunts and we eat the animals that he kills. So, we eat deer, boar and elk,” she told us. Wait, what? Chris Pratt kills a wild boar, brings it home and she fries it up?

So eggs with wild boar bacon? “More like loin or ground wild boar. We put it in chili and stuff, it’s actually really good. If he’s going to kill the animal then we have to eat it. That’s what I married into,” she said. Well, at least she’ll never go hungry.

When asked about the strangest thing her husband ever killed for dinner, she said, “Squirrel. My brother and my husband spiced it up and cooked it on the barbecue because my mother wouldn’t let them cook it inside.”

So, did the comedienne enjoy dining on this medium-sized member of the rodent family? “It was disgusting. We covered it up with so much spice, you couldn’t get a sense of what the meat actually tasted like, but it was really greasy. And for me, it was just the knowledge that you’re eating a squirrel. It’s not on my list of most delicious meals.”  Thanks for the heads-up, Chef Anna.

When she’s not grilling greasy tree mammals, Faris is attending award shows. We asked her what it was like to present with Mom costar Allison Janney at the Emmys.

“I was really nervous. I’ve only ever presented at the MTV Movie Awards. On Saturday, we had a rehearsal, which at first I thought was the dumbest thing. What do you mean I have to rehearse the two lines I have to say? But I completely messed up those lines even though we had a teleprompter. I can’t even imagine what’s it’s like to be nominated and be waiting. I was definitely thinking about my presenting moment during the whole show.”

But her performance wasn’t the only thing Faris was stressing about. “I was also really nervous how my look was going to go over. For me, going on that red carpet, I felt really vulnerable. At one point, I was like, ‘I have way too much powder on, my lipstick needs to be refreshed, I’m sweating, this color is really bright’. I kept thinking, ‘I love this dress’, but most of the other dresses were darker, fall colors and I was in this bright yellow.”

Faris admits that walking red carpets is the part of the entertainment industry she doesn’t necessarily enjoy or feel particularly good at.

“These days, everyone has an opinion about it. I’ve been on the ‘Worst Dressed List’ a number of times or on the ‘I Wore it Worse’ list a few times in US Weekly. It’s akin to being a cutter if you go into that world of Googling yourself. But most actresses I’m friends with feel a lot of pressure about their hair and make up.”

We asked Faris what it was like being around so many talented, funny women at the Emmys. She said, “It was a thrill to see all those people I admire. I loved the opening bit with Tina [Fey] and Amy [Poehler], heckling Neil Patrick Harris — that was awesome. And Julia [Louis-Dreyfus], watching the Seinfeld reruns, she’s just fantastic! With comedy, you just have to jump into the deep end a little bit in terms of commitment. If you’re playing a character who’s not all that bright, you can’t wink at the audience in any way. You have to give up a sense of vanity and all those women do that so well and in this industry.”

We also wanted to know if she thought Hollywood was starting to make more comedic films starring women. “Studios feel pressure to be conservative with investing millions of dollars,” she said. “But women like Melissa McCarthy, Sandra Bullock, Kristen Wiig are all women who are making huge amounts of money, so there’s a realization now that, oh, there’s an audience for funny women. It’s very exciting that there’s more room.”

We’re excited, too! Anna Faris can be seen in her new sitcom Mom Monday nights on CBS. Her film

Get Cloudy with a Chance of Meatballs 2 early on digital today. Get it on Blu-ray combo pack Jan. 28.