Andrew McMahon has come a long way in a decade. He led two successful bands and beat cancer, and now he is an Emmy nominee for his work on Smash. 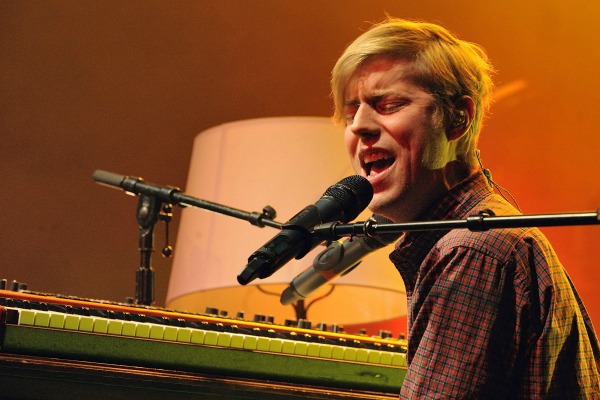 At 31 years old, Andrew McMahon has lived a lifetime. He went from pop punk prince to cancer survivor, and now he can call himself an Emmy nominee. The Something Corporate and and Jack’s Mannequin mastermind jumped into the world of TV and started writing music for Smash. He has been nominated for a 2013 Emmy Award for his song “I Heard Your Voice in a Dream.”

McMahon was out on tour when he heard the news.

Writing music for TV was never in McMahon’s plans, and it was by chance that he was given the opportunity. McMahon admits he didn’t know much about the show (besides that his wife was a huge fan) before the showrunner for Season 2, Josh Safran, asked him to submit some of his work.

“I tried my best to approach it like I would any song that I would write for myself,” McMahon told The Hollywood Reporter. “I liked the theme and the idea of this guy who is still in love with this girl, even though she robbed him. It was a quick write.”

McMahon may be best remembered as the lead singer of Something Corporate, whose biggest hit, “If You C Jordan,” was released in 2001. He went on to work on solo music and form the band Jack’s Mannequin. In 2005, just a few months before Jack’s Mannequin’s first album was supposed to come out, McMahon was admitted to the hospital and was later found to have leukemia.

The singer has since recovered, and he started an organization — the Dear Jack Foundation — that works to find a cure for the disease.

Having had a successful music career and having survived cancer, McMahon seems to be able to do anything he sets his mind to. When he took on the task of writing for Smash, though, he knew it would be a whole new world for him.

“It seems like maybe it was just a hard place to find a fit,” he said. “A show about Broadway on TV. I think there were already some things that made it difficult to sell, but truthfully, the show had so many loyal followers. And even today, everywhere I go, when people find out I wrote for the show, I’m so surprised by how many people freak out because it was their favorite show.”

Besides his Emmy-nominated song, McMahon also wrote “Reach for Me” and “I’m Not Sorry” for the soundtrack. The songwriter added that he would have loved to write more for the show if it had kept going. But for now, he is happy with what Smash has given him.

“I’m totally proud to have worked on it, and certainly this is the first major award nomination I’ve ever received.”