It’s been weeks, but Robin Thicke has remained silent about his infamous VMAs performance with Miley Cyrus — until now. The singer is speaking up about what the foam finger really means. 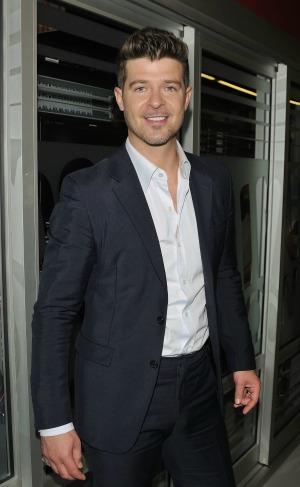 Robin Thicke may be one of the only people in Hollywood who has not yet spoken out about his performance with Miley Cyrus at the MTV Video Music Awards. While the show was weeks ago, it still seems to be a topic of conversation, and it has even sparked a lot of new Miley Cyrus memes.

Thicke finally decided to break his silence on the performance, saying that the whole point was to be the talk of the town.

“We knew what we were getting ourselves into,” Thicke told Star magazine. “We’re entertainers, and the VMAs is the perfect place for a little shock and awe. Yeah, we kind of knew when we were in rehearsal. We were like, ‘OK, if you touch me with your foam finger all over my crotch, obviously a few people are going to have something to say about this.’ But that was the whole point. I mean, the whole point was to excite and provoke and entertain.”

The “Blurred Lines” singer was the perfect accomplice for Miley Cyrus‘ quarter-life crisis, but Thicke said the performance, full of sexual undertones, foam fingers and twerking, wasn’t sexual at all.

“I thought it was silly and funny. She was being humorous and naughty,” he said. “But it wasn’t sexually charged at all. That’s who she is and that’s how she likes to dance. And she was just being herself and I was just being myself.”

Paula Patton lays it on Thicke about her blessed life >>

Cyrus has already talked about the VMAs, saying pretty much the same thing.

Just after the awards show, she told MTV, “Me and Robin the whole time said, ‘You know, we’re about to make history right now.'”

And there is a good chance they did. The performance will likely be talked about for years to come.

Thicke is not exactly an angel and has been known to flirt with controversy. His wife, Paula Patton, who was in the audience during the whole thing, said she loved it.