Prince William and Kate Middleton smiled and joked during their first post-baby appearance on Thursday night. 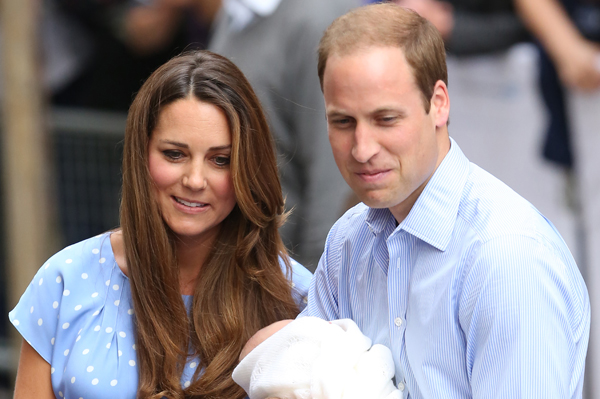 Kate Middleton dazzled in a custom Jenny Packham dress during her first post-baby outing, but the new mom’s mind wasn’t far from her son the whole night.

“As you might have gathered, Catherine and I have recently become proud parents — of a baby who has a voice to match any lion’s roar!” Prince William said during his speech at the Tusk Conservation Awards on Thursday night in London. “This is actually our first evening out without him, so please excuse us if you see us nervously casting cheeky glances at our mobile phone to check all is well back home.”

Princess Madeleine of Sweden is pregnant! >>

It’s not the first time William has referred to his new son’s pipes. The 31-year-old royal told reporters outside St. Mary’s Hospital that the royal baby “has a good pair of lungs on him, that’s for sure.”

As for what he looks like? William told reporters that little Prince George looks like “a mix of both of us.”

It sounds like little George is going to have quite the personality. He might only be 2 months old, but William recently told CNN that he reminds the family of another cheeky royal.

“He’s a little bit of a rascal, put it that way. So he either reminds me of my brother or me when I was younger. I’m not sure,” he told CNN correspondent Max Foster. “He’s growing quite quickly, actually. But he’s a little fighter. He kind of, he wriggles around quite a lot. And he doesn’t want to go to sleep that much, which is a little bit of a problem.”

As for Middleton? The svelte mum beamed during her first post-baby appearance, despite any anxiety she had about leaving her baby boy behind.

“Kate was still smiling and waved to a few members of the public waiting on the pavement as their car pulled away,” a source told Us Weekly.