It was the sex scene that did it for me: made me close the book, pinch my brow and wonder what I’d gotten myself into. Though brief, that part of Terry McMillan’s new novel, Who Asked You, was true to her style: straight, no chaser. McMillan spoke with SheKnows about the motivation behind her eighth novel. 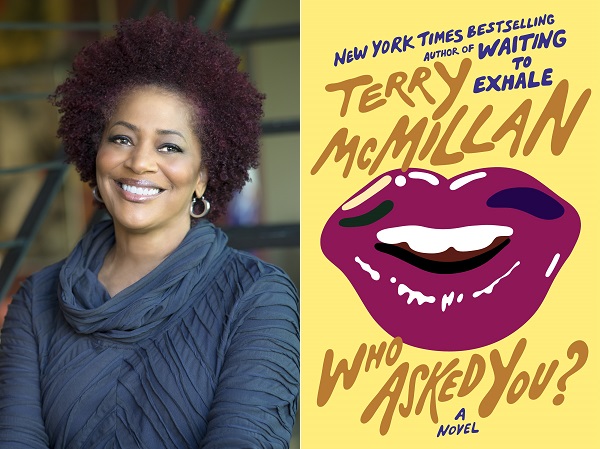 Who Asked You, which hits bookshelves Sept. 17, tells the story of grandmother Betty Jean — BJ — through a large cast of characters, including a racist, an unsympathetic social worker and a caregiver who dresses more like a go-go dancer than a nurse.

The story opens in 2001 on Betty Jean, a hardworking woman in a working-class Los Angeles neighborhood whose daughter drops off her two young children and disappears.

“[The idea for the book] started because for years, I was always fascinated by and curious and empathetic toward and about grandparents who have to … raise their grandchildren,” McMillan said. “Simultaneously, I wanted to tell a story about people who are always sticking their nose in somebody else’s business. Or thinking they have somebody else’s life all figured out and they have the answer to your problem.”

Each chapter is written from a different character’s perspective, from BJ’s best friend, Tammy, a white woman who has dealt with the racism that comes with having married a black man, to her drug-addicted daughter, to a son who seems so hell-bent on forgetting his roots that he can’t bring himself to visit “the hood.”

“It didn’t start out being 15 characters,” McMillan said. “I wanted to be able to show each character’s point of view.”

And what a view it is. McMillan seems to serve as a sort of conduit for her characters, shining a light on attributes that may be otherwise hidden. Sometimes what that light uncovers surprises even the author.

“I try to write about characters who have shortcomings but they also have virtues. I just put them in a situation where they basically are being challenged. And most of those challenges come from their shortcomings. Whatever you’re running from, that’s what you’ll have to deal with. Just like real life.”

She adds, “In real life, none of us are totally virtuous or perfect. There are a lot of things about ourselves that we don’t let other people see. In a book, you can see it. That’s [what] my goal is. That’s what my job is [as] a writer.”

McMillan takes readers behind the scenes through prison letters from BJ’s son (touting his innocence, of course), an 8-year-old admiring the breasts of his grandfather’s nurse and a school administrator who may be harboring a decades-long crush. And, of course, the sex scene.

As part of her process, McMillan delved completely into finding out who her characters were and what made them tick.

“I befriend them as a result of writing about them because I do so much background on them, [so] that I know them. I know what size shoe they wear, their bank accounts, if they write bad checks. I know all of this stuff and as a result, I just choose the thing that might be the most challenging to them based on who they are.”

Somehow, McMillan makes you forgive the characters time and time again, through homophobia, hatred and racism.

In pure McMillan style, Who Asked You isn’t a feel-good story, but it’s certainly wrought with emotion that leaves the reader with a feeling that McMillan says she would like to be hope. She says it’s a story that shows how we all can be more supportive of each other during hard times, as well as more forgiving.

“Some of us are doing the best that we can, even if we don’t think so. We basically just need to cut each other a little more slack.”