Angelina Jolie is Down Under while she films Unbroken and decided to treat her children to the local cuisine, which included kangaroo meat and grubs. 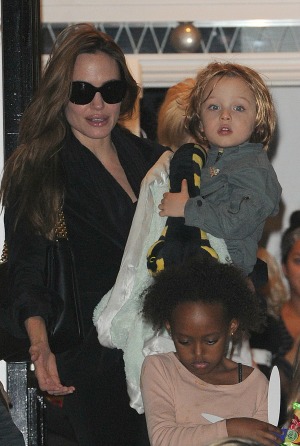 It’s always good to try new things and open your mind to new experiences and it appears Angelina Jolie wants exactly that for her children.

During a recent trip to Australia, Jolie, who is mother to six children, insisted that her kids partake in the local cuisine and reportedly made her children try kangaroo meat and witchetty grubs during their stay Down Under.

While the thought of eating kangaroo meat, emu and grubs may turn some people’s stomachs, the Jolie brood is used to having exotic combinations on their plates…

Remember when Jolie previously revealed her boys’ love for crickets to E! Online? She said, “My boys love to eat crickets. It’s their favorite thing,”

As a source revealed to The Sun newspaper, “Whenever they are in new countries the kids have a rule about trying local food.”

“The tour guide took them to a specialist Aussie restaurant and they had a mix of kangaroo and emu on a pizza.”

The actress is in Sydney while she shoots her new film Unbroken and decided to bring the family along.

Jolie shares her six children with fiancé and love of her life Brad Pitt. They are Maddox, 12, Pax, 9, Zahara, 8, Shiloh, 7, and 5-year-old twins Knox and Vivienne.

Although Pitt is vegan, his wife-to-be clearly does not share his way of life. Having been vegan previously and claiming that she nearly died from the experience, she has chosen to bring her children up eating meat.

The starlet’s children are even reported to have tried witchetty grubs during their holiday. Witchetty is an Australian term for white moth larvae.

These grubs can be eaten raw or cooked and are a staple food of the Aboriginal women and children. W hen cooked, it is said the grubs become a high source of protein and can turn a light yellow color.