It’s “secrets” week on The Talk. On Wednesday, it was Julie Chen’s turn and she revealed a plastic surgery secret from her past. 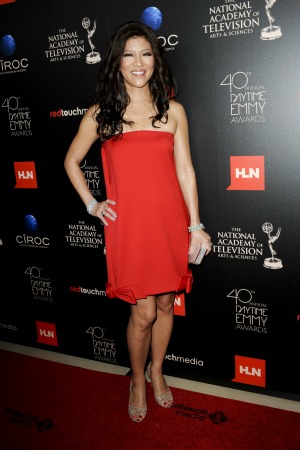 Apparently The Talk has become the juiciest place to reveal secrets on daytime television. In addition to Sharon Osbourne dishing about her fling with Jay Leno, co-host Julie Chen used Wednesday’s show to unveil her story during “secrets” week.

As a young reporter back in Dayton, Ohio, the then 25-year-old was looking for an opportunity to move up the ranks. She asked her news director if she could fill in for vacationing anchors over the Christmas holiday. The answer she received was quite shocking.

George Clooney and other male celebs who inspired cosmetic fads >>

“‘Let’s face it Julie, how relatable are you to our community? How big of an Asian community do we have in Dayton?'” Chen recalled him saying. “‘On top of that, because of your Asian eyes, sometimes I’ve noticed that when you’re on camera and you’re interviewing someone, you look disinterested. You look bored.'”

The daytime talk show host said his words “felt like a dagger in my heart.”

The issue with her Asian looks reared its ugly head again when a “big-time agent” echoed the words of her Ohio news boss.

“He said, ‘I cannot represent you unless you get plastic surgery to make your eyes look bigger,'” she shared. “He then whips out a list of plastic surgeons who have done this surgery.”

Chen struggled with her options, but ultimately decided on having the surgery after consulting with her family.

The Big Brother host said, “After I had that done, the ball did roll for me. I struggle with, ‘Wow, did I give in to the man and do this?'”

Chen’s co-hosts voiced their support for her difficult decision. It also seems that the TV personality is at peace with the choice that she made.

She said, “I don’t like to live with regret. I did it, I moved on. No one’s more proud of being Chinese than I am, and I have to live with the decisions I’ve made, every decision I’ve made — it got to where we are today.”